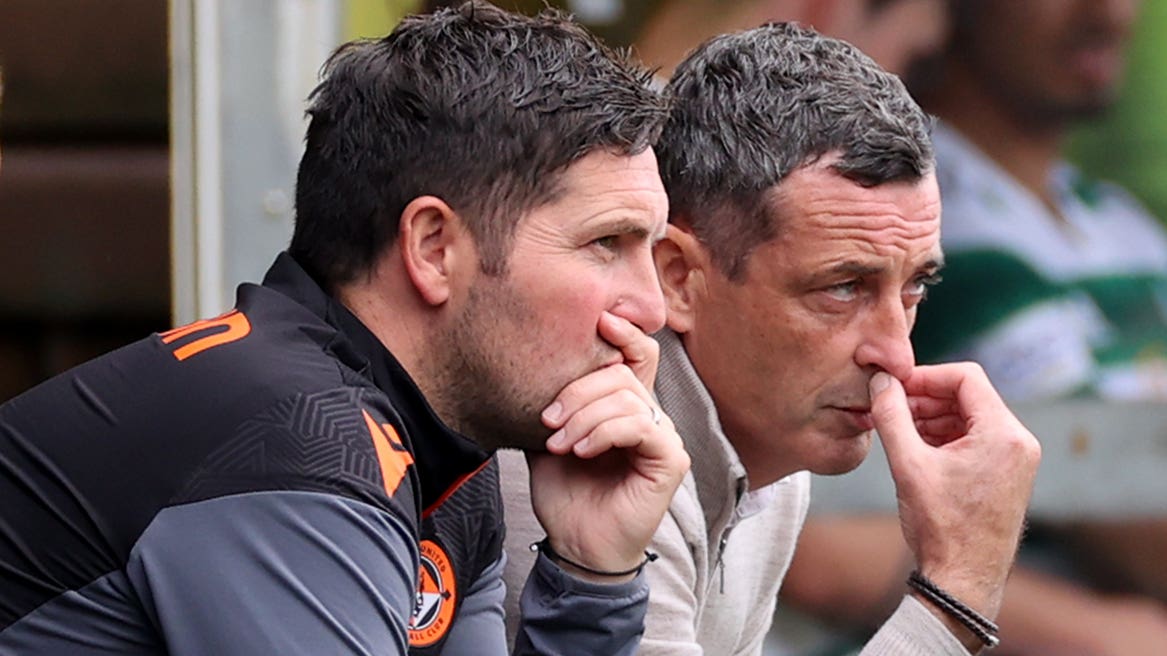 Dundee United caretaker manager Liam Fox has called on the players to reflect on their part in Jack Ross’ sacking and produce a reaction at Livingston.

Ross has been dismissed after just seven games in charge, the latest of which was a 9-0 thrashing against Celtic on Sunday, the club’s heaviest defeat at Tannadice.

The former Alloa, St Mirren, Sunderland and Hibernian manager started off with a draw at Kilmarnock and Europa Conference League victory over AZ Alkmaar.

However, after a 1-0 home defeat by Livingston, United went down 7-0 in the Netherlands to equal the worst result by a Scottish club in European competition.

A 4-1 defeat by Hearts and a 3-0 home loss to St Mirren were followed by another capitulation against Celtic and Fox has been installed as caretaker manager for Wednesday’s Premier Sports Cup tie at his former club Livi.

Fox, who was reunited with his former Hearts coaching colleague when Ross was appointed on June 20, said of the past few days: “It’s been difficult, probably a wee bit more difficult for me than the majority of the rest because of my relationship with Jack, personal and professional.

“Listen, we know the results haven’t been good enough, we know that hasn’t been acceptable, so there is always a risk that someone could lose his job.”

When asked about the reaction in the dressing room, Fox said: “Obviously there is disappointment. We have all been in this game long enough to know that it happens and it will happen again, and it will happen to another manager probably very, very soon.

“But I think it’s important that the players and staff and everybody just takes a wee second to reflect on the part they have all played in it.

“Jack’s the guy that takes the fall for it. I think the players will reflect and look at themselves. We need to see a response.

“We are fortunate we have got a game quickly and it’s given us a focus. It’s a really important game and it’s going to be a tough game.

“One thing I know about going down to Livingston is they will be aggressive and will be on the front foot. We need to match that and start repaying the supporters for the results over the past few weeks.

“Players and staff and all of us have had a lot of things thrown at us, accusations about throwing the towel in. I think as a professional, that’s probably the worst thing that anyone can ever level at you. So we need to see a response.”

When asked if the players had given enough for their manager, Fox said: “The players have had a couple of heavy defeats. I don’t think they threw the towel in, no. I just think there is a lack of confidence.

“We played against some good teams as well in that period, we need to remember that.

“We have a choice now with what we do with the way the last few weeks have gone. We can accept it and roll over or we can come out and get on the front foot and be aggressive and we can hopefully put on a performance and put a team on the pitch that the supporters can be proud of.”

United are now looking for a fifth manager since American businessman Mark Ogren took control of the club in December 2018.

Robbie Neilson left for Hearts in 2020 after leading the club to promotion while Micky Mellon left by mutual consent a year later and Tam Courts departed for Hungarian club Honved in June on the back of a fifth-placed finish.

The latest departure will put further scrutiny on sporting director Tony Asghar, who plays a key role in recruitment. Asghar last week stated that Ross was “not going to come to a club where he doesn’t get the players he wants”.