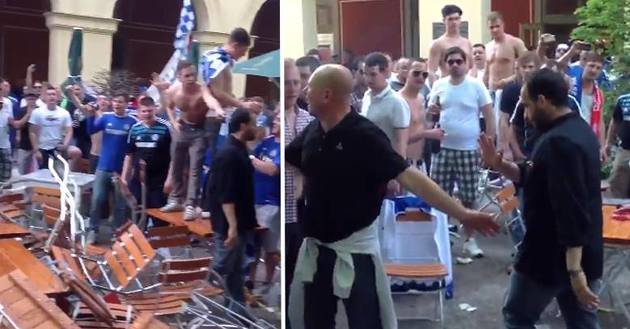 A video from 2012 of some Chelsea fans destroying a cafe and punching a member of staff has gone viral.

The incident is believed to have taken place in Munich in 2012, possibly before Chelsea went on to win the Champions League for the first time in their history.

Last year 4 Chelsea fans were banned from attending football matches after a video surfaced of them racially abusing a black man in Paris.

Clip of Chelsea fans in Munich a couple of years back… (Via @alffienoah) #CFCpic.twitter.com/xsaLI2rgbm

Football fans on Twitter were outraged by the video:

Chelsea fans literally destroyed a man’s living.. Hope FA steps into the matter and takes action against them..

Gotta love it when Chelsea fans complain about other teams fans ?

Why are we not surprised by that behaviour from Chelsea fans. Should be ashamed picking on one bloke. So brave are Chelsea fans.