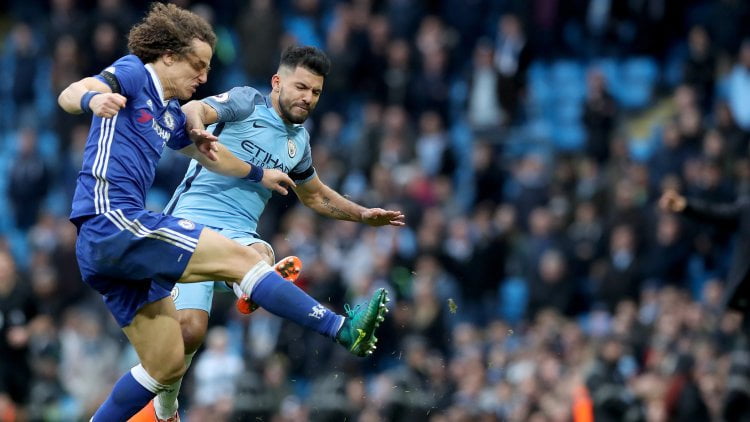 Pep Guardiola apologised for the injury-time brawl that marred a pulsating encounter between Manchester City and Chelsea but refused to criticise Sergio Aguero.

The Argentinian sparked the melee with a knee-high tackle on David Luiz that saw him handed a straight red card by referee Anthony Taylor.

Fernandinho was then also sent off for repeatedly pushing Cesc Fabregas, with the Spaniard ending up falling over an advertising hoarding.

It proved a costly afternoon for City, who led at half-time but ended up losing 3-1, and now face losing Aguero for four games and Fernandinho for three.

Guardiola said: “It is a pity it finished like this. It was the way the referee decided. I don’t like that, I apologise for what happened.”

Aguero has already served a three-match ban this season, imposed retrospectively for an elbow on West Ham’s Winston Reid in a game in August.

Taylor appeared to have little option but to send off Aguero, but Guardiola said: “He (Luiz) went down and he (Aguero) touched him. It wasn’t intentional.

“Maybe I have to understand many things about the referees here. It’s a red card, okay, we are going to deal with that.”

Guardiola compared the incident to the red card received by Nolito against Bournemouth for a clash with Adam Smith.

Fernandinho got involved after Fabregas tussled with Kelechi Iheanacho, with the Spaniard appearing to provoke Fernandinho by slapping him on the cheek.

Guardiola said: “Fernandinho went to defend because the opponent was like this (shoving) his team-mate. Nolito was red card and three games (for that).”

The City boss was frustrated by the result, but proud of his team for their performance against opposition who have now won eight Premier League games in a row.

“Congratulations to Chelsea,” said Guardiola. “To give my opinion when you lose it looks like an excuse. I am so proud of my team and how we played. I came here to try to play the way we played today.

“We cannot forget about which team we played. We created more chances than (against) Burnley and Crystal Palace, when we won. I congratulate my team for what we did.

“It’s not enough. In the boxes we are not strong enough. But Crystal Palace maybe we didn’t deserve to win. It is part of the process. Keep fighting, keep going, improve our mistakes. But I don’t have regrets.”

Guardiola, meanwhile, declined to comment on a first-half incident that might have resulted in a red card for Luiz.

The defender nudged Aguero when he looked poised to go clean through, but the referee, who also turned down a number of City penalty appeals, ruled it was not a foul.

“We didn’t win because we missed a lot of chances, not for the referee,” said Guardiola. “I have to understand them, that’s all. There are many things in the last games. I will speak with my team how we have to handle these type of situations.”

Chelsea manager Antonio Conte did not do a press conference, but told Sky Sports: “I think today was very tough and the game was open until the end. There were lots of chances for both teams to score.

“I saw lots of character from my team and that’s very important to grow. But we must continue to work and improve.”

The Italian praised Diego Costa, whose equaliser sparked Chelsea’s recovery, for playing the role of peacemaker at the end.

“Diego is showing he is using his passion in the right way and I’m very happy about that,” added Conte.