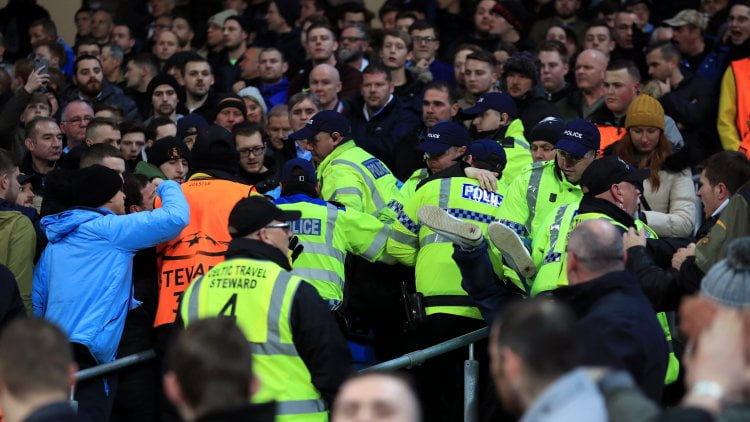 Celtic in trouble with Uefa

UEFA has started disciplinary proceedings against Celtic for the behaviour of their supporters during Tuesday’s Champions League game at Manchester City.

The Scottish champions face charges from European football’s governing body for setting off fireworks and “crowd disturbances” at the Etihad Stadium.

The game, a dead rubber with City already assured of qualification for the knock-out stages and Celtic unable to advance, finished 1-1.

This case will be dealt with by the UEFA Control, Ethics and Disciplinary Body on February 23, 2017.

There had been some suggestions after the game that Manchester City may face charges, too, after a brief fight broke out in the ground between City and Celtic fans in the second half.

Home fans also booed the Champions League pre-game anthem, as they have several times since the club was fined for breaking UEFA’s financial fair play rules in 2014, but City appear to have escaped without censure.

Celtic brought an estimated 4,000 fans to the game and, for the most, their behaviour was praised.

A statement on the Greater Manchester Police website said there were 14 arrests made throughout the day for relatively minor offences.

Superintendent Craig Thompson of Greater Manchester Police Specialist Operations Branch said: “Our policing operation has now come to an end and I am pleased to say that the fixture passed largely without incident, which I think is a testament to fans of both clubs.

“I would like to thank them for their cooperation throughout and although the result may not have been what either side wanted, I hope everyone in attendance enjoyed the occasion and the competitive atmosphere the game was played in.

“We have significant experience in policing occasions like this and sadly, as is often the case, we did experience a small number of incidents which were dealt with swiftly and resulted in a number of arrests.

“However, the majority of fans were extremely well behaved and I hope everybody has a safe journey home.”

But one of those arrests was made when a 27-year-old man threw a hamburger at a police horse before the game.