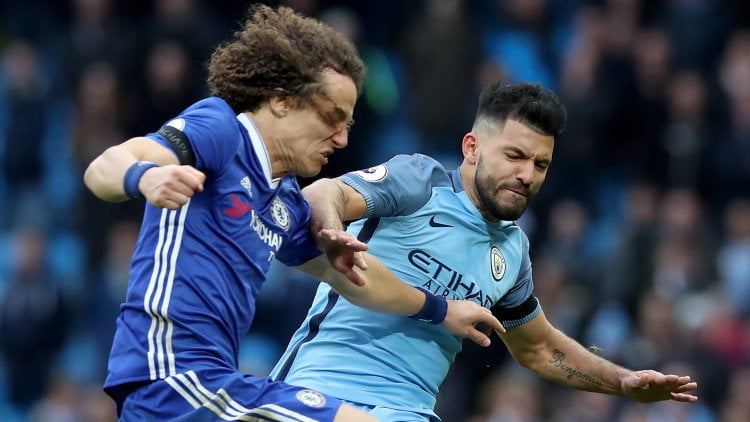 Manchester City and Chelsea have been charged with failing to control their players last Saturday – but Cesc Fabregas has avoided additional sanction after apparently striking Fernandinho.

Aguero was shown a straight red card, triggering a four-match ban, and Fernandinho was also sent off, with the Brazil midfielder apparently reacting to a slap in the face by Fabregas by shoving the Spain playmaker over the advertising hoardings.

Fabregas was shown a yellow card by referee Anthony Taylor following the melee, for adopting an aggressive attitude.

The apparent slap by Fabregas on Fernandinho was not seen by match officials, so it could be reviewed, but no further action will be taken.

A FA statement read: “Chelsea’s Cesc Fabregas will not face any further action in relation to an incident involving City’s Fernandinho.

“Off the ball incidents which are not seen at the time by the match officials are referred to a panel of three former elite referees.

“Each referee panel member will review the video footage independently of one another to determine whether they consider it a sending-off offence.

“For retrospective action to be taken, and an FA charge to follow, the decision of the panel must be unanimous.”

Chelsea’s 3-1 win, their eighth straight Premier League victory, finished on a sour note. The clubs have until December 8 at 1800 to respond to the charges.

The statement read: “Both Manchester City and Chelsea have been charged for failing to ensure their players conducted themselves in an orderly fashion and/or refrained from provocative behaviour.

Chelsea are already on a warning over previous similar breaches of FA rules.

Those record fines were reduced on appeal in July to £290,000 for Chelsea and £175,000 to Spurs, but both clubs were warned as to their future conduct.

If Chelsea are sanctioned for the behaviour at City, their prior record will likely count against them.

City will feel the impact of the indiscipline immediately.

Aguero’s offence was effectively his second dismissal of the season after he served a three-match ban for violent conduct, issued retrospectively after he was adjudged to have elbowed West Ham’s Winston Reid in August.

The Argentina striker will miss City’s matches with Leicester, Watford, Arsenal and Hull this month. Fernandinho will be available for the Hull game on Boxing Day.

City defender Nicolas Otamendi received his fifth booking of the season to prompt an automatic one-match suspension, so City are without three players for Saturday’s trip to Leicester.

The two red cards against Chelsea took City’s number of on-field dismissals to five in the early months of Pep Guardiola’s reign.

Fernandinho and goalkeeper Claudio Bravo were sent off in Champions League action, while Nolito was sent off in September’s win over Bournemouth.

Ibrahimovic was criticised for a challenge on Everton’s Seamus Coleman and McClean for a tackle on Watford’s Roberto Pereyra which resulted in a yellow card.

Both incidents were seen and dealt with by the match officials at the time.