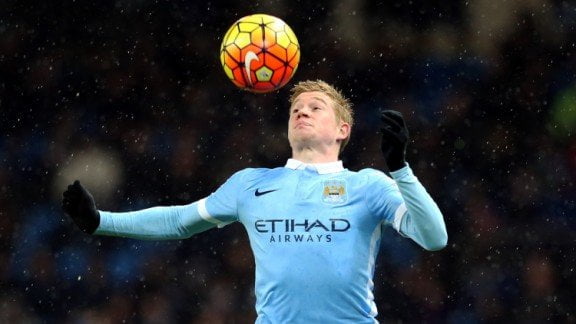 Kevin De Bruyne is hopeful of returning to action with Manchester City after the current international break.

The Belgium forward suffered knee ligament damage, as well as a sprained ankle, during City’s Capital One Cup semi-final against Everton on January 27.

His return would give City a major lift at a critical stage of their season, and particularly after key players Vincent Kompany, Joe Hart and Raheem Sterling joined the injury list in the past week.

De Bruyne told City TV: “The injury is going good. I am training very well and thinking I am ahead of schedule, so I am looking to be back after the international break. It looks like I’m a couple of weeks ahead.”

City went on to win the Capital One Cup and have reached the Champions League quarter-finals during De Bruyne’s absence, but the £54million record signing has still been badly missed.

Without the 24-year-old, who has contributed 12 goals and 12 assists this season, City have fallen off the pace in the Barclays Premier League title race and are now facing a battle to retain fourth place.

De Bruyne said: “I think it is always frustrating for a player not to be there but from the moment it happened I switched my button and I am preparing myself to do well the next couple of games I will be there.

“It has been tough because we lost a couple of games in the league and we are a little bit behind, but we are there in the Champions League – looking forward to that obviously and hopefully we can do well.”

City trail Premier League leaders Leicester by 15 points, which seems an insurmountable gap even if they have eight games remaining compared to the Foxes’ seven. Their next game is at Bournemouth on April 2.

De Bruyne recognises it is now a difficult task but insists City will not stop fighting.

He said: “Mathematically there is always a chance but obviously we are a lot of points behind with eight games to go.

“Even if we don’t get it we have to try to be second and try to win the most games as possible, and also qualify for the Champions League next year.

“We just have to be confident we can still do it. If in the end if we don’t manage it and it is not our fault, so be it, but we have to try to win all the games possible.”

De Bruyne has had plenty of good news during his lay-off, however, having become a father for the first time, to a son, earlier this month.

“I’m very happy,” he said. “The moment that he comes to us is a moment you can’t explain. It is the best moment of my life until now.”

City manager Manuel Pellegrini has suggested De Bruyne and fellow injury victims Samir Nasri and Fabian Delph could step up their recoveries by playing friendlies during the international break. Kompany (calf), Sterling (groin) and Hart (calf) are likely to be out for at least a month.

Meanwhile, City have continued their growth into China by announcing a new regional partnership with events organisation SoccerWorld.

The company, which runs sport centres throughout China, will become City’s ‘official recreational soccer partner’ in the region and club coaches will visit the country twice a year among several new initiatives.

The deal comes three months after a Chinese consortium acquired a 13 per cent stake in the City Football Group for a reported £265million.