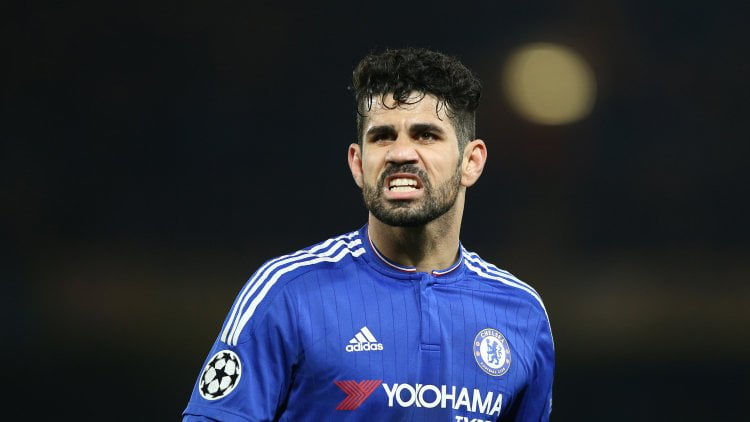 Chelsea striker Diego Costa could be banned for three matches following his red card at Everton.

The striker has no case to answer over speculation he bit Gareth Barry during Saturday’s FA Cup quarter-final defeat at Goodison Park. The Everton midfielder insisted Costa had not bitten him after their altercation, during which Costa nuzzled his mouth into Barry’s neck.

But the Football Association has charged Costa with misconduct for his reaction to his 84th-minute dismissal by referee Michael Oliver. And the FA is still investigating an alleged gesture made by Costa and aimed at Everton supporters.

Costa is already suspended automatically for his first red card as a Chelsea player and will miss Saturday’s Premier League clash with West Ham. Two additional and separate one-match bans could follow.

He has until Thursday at 6pm to respond to the misconduct charge and if found guilty could be given a one-match ban.

The Spain striker has also been given until 6pm on Wednesday to explain an alleged gesture towards Everton fans at half-time of the match, which Chelsea lost 2-0. A charge, and a one-match ban, could follow.

A statement from the FA on Monday evening read: “Diego Costa has been charged in relation to Chelsea’s FA Cup Sixth Round fixture against Everton on Saturday, March 12, 2016.

“It is alleged his behaviour, after being shown a second yellow card in the game, amounted to improper conduct.

“Meanwhile, the Chelsea striker has until Wednesday (March 16, 2016) to provide his observations to The FA in relation to an alleged gesture he made towards Everton supporters while leaving the pitch at half-time.”

Costa was sent off six minutes from time and Barry followed three minutes later for a second yellow card. He will miss Everton’s game with Arsenal on Saturday.

Chelsea boss Guus Hiddink, who said his player had been “chased” during the game, later joked that he should take Costa to watch the film “Anger Management” after a catalogue of incidents since his £32million arrival at Stamford Bridge during the summer of 2014.

Costa is in his second season at Chelsea and is again reportedly agitating for a return to Atletico Madrid.