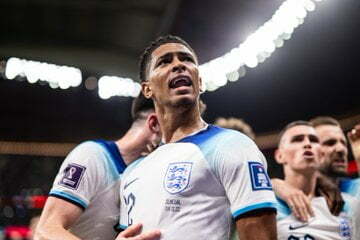 England see off Senegal to set up France showdown

By Blair MalloyDecember 4, 2022No Comments

England put three past Senegal, as Gareth Southgate’s side set up a quarter final showdown with France on Saturday.

Despite being lethargic for large parts, goals either side of the half from Jordan Henderson, Harry Kane and Bukayo Saka were more than enough to keep England’s unbeaten record against African sides at World Cups intact.

The two sides were facing of for the first time in their history and it seemed to be a case of trying to work each other out, in what were scrappy opening exchanges.

England, albeit slowly, were probing the Senegal defence. It was the African champions however, who had the first real chance of the match after 22 minutes. A dangerous ball fell to Watford’s Ismailia Sarr, who blazed over from close range.

Aliou Cisse’s side seemed to grow in confidence whilst England continued to look laboured. On the half hour mark Jordan Pickford was forced into a smart stop from Boulaye Dia’s driven shot.

Despite a less than inspiring performance, seven minutes before the break, England took the lead.

Jude Bellingham injected much-needed drive into the side, as he powered through the Senegal defence. The midfielder rolled the ball across the box where Jordan Henderson was waiting to provide a composed finish.

Bellingham was once again at the heart of proceedings as England doubled their lead in first half stoppage time.

The 19-year-old drove through the heart of the Senegal team, before unleashing Phil Foden down the left hand side.

The Manchester City forward clipped the ball across to captain Harry Kane, who rifled a low volley past Edouard Mendy to double the Three Lions’ advantage at the break.

Ten minutes into the second half and England all but put the game to bed by adding a third.

Phil Foden rode a tough tackle on the left wing before delivering a dangerous cross across the area, where Bukayo Saka was on hand to lift the ball over the helpless Mendy.

Senegal’s early promise had faded away to nothing as the last half hour of the match drifted away. England will now turn their attention to France on Saturday, where they are sure to face a sterner test.