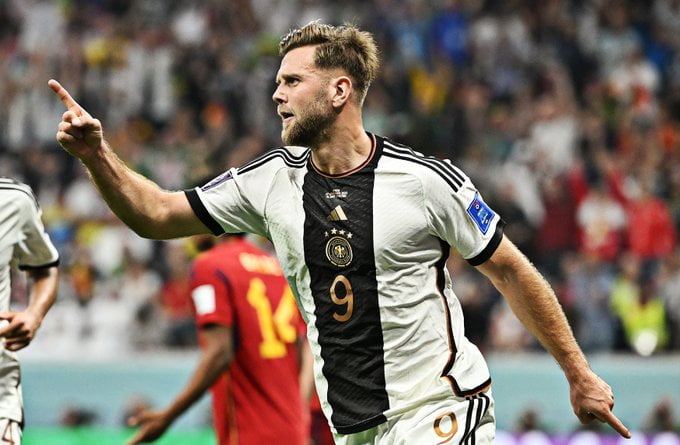 By Blair MalloyNovember 27, 2022No Comments

It was a tale of two centre forwards in AL Khor as Niclas Füllkrug scored a late equaliser, after Alvaro Morata had given Spain the lead, on a night where Germany’s last 16 destiny fell out of their hands in a tight Group E.

Both teams started without recognized strikers, but it was two ‘traditional’ forwards that made the biggest impact for either side from the bench.

Hansi Flick re-shuffled his pack after Germany’s shock opening loss to Japan, with Thilo Kehrer and Leon Goretzka added in place of Nico Schlotterbeck and Kai Havertz, to add some much-needed steel.

Luis Enrique meanwhile stuck with the same XI that battered Costa Rica 7-0 in the opening fixture.

Spain looked to pick up where they left off on Wednesday and almost found the net after 7 minutes. Dani Olmo worked space on the left wing before cutting inside and unleashing a ferocious shot, forcing Manuel Neuer into a reflexive save to tip it the ball on to the bar.

The first half descended into a scrappy affair, as Germany disrupted the flow of Spain’s rhythmic game.

Flick’s men thought they had the lead 5 minutes before the break when Antonio Rudiger powerfully headed in from a free kick. It was not to be however, with VAR spotting the Real Madrid man’s impatient run taking him offside.

Germany’s lack of a cutting edge was noticeable as Thomas Muller and Serge Gnabry passed up opportunities in the second half.

As if to compound the German’s striking troubles further, Spain went ahead through the only recognized striker on the park just after the hour mark.

Jamal Musiala passed up a glorious opportunity to bring Germany level, after beating the Spanish offside trap only watch his shot beaten away by Unia Simon.

The Germany boss introduced his own number 9 from the bench in Niclas Füllkrug, something of a surprise selection given he had spent the majority of his career playing in the lower divisions of German football as recently as last season.

He was to be vindicated on 83 minutes though when the Werder Bremen forward found himself free in the box and unleashed a devastating rocket into the top corner past the helpless Simon.

Neither team could find a winner, leaving Spain in pole position to qualify for the next round, whilst Germany’s fate is now out of their own hands.