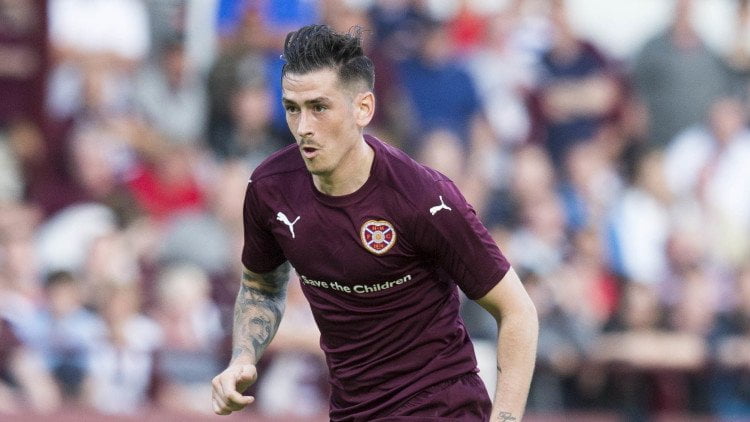 Hearts striker Bjorn Johnsen doubled his tally for the season with two goals in a convincing 3-0 Ladbrokes Premiership victory over Motherwell.

The towering American struck either side of the break before Jamie Walker completed the scoring as Robbie Neilson’s side collected their first win in five matches.

Neilson would also have been delighted about keeping a clean sheet after conceding 10 goals in the four matches preceding the visit of the Steelmen.

The Gorgie outfit now go into Wednesday’s home game against Rangers knowing they will climb back up to second if they beat Mark Warburton’s side.

The home side made a promising start and Craig Samson was called into action to get down to three Walker shots in quick succession.

Pater son came off the worst after receiving treatment for a badly swollen injury, which was also bleeding, just above his left eye.

Heneghan returned to the pitch sporting a bandage, while Paterson was forced to come off in the 27th minute – with Liam Smith coming on.

Paterson is the club’s leading scorer this season with seven goals but Johnsen illustrated his predatory instincts when he opened the scoring in the 31st minute.

Arnaud Djoum picked out the marksman with a perfectly weight defence-splitting pass and Johnsen coolly rounded Samson to find the net.

Johnsen thought he had scored his second moments later after a header from Faycal Rherras’ cross looped over Samson – but he was adjudged offside.

Motherwell goalkeeper Samson then kept out a close range Igor Rossi effort before Djoum blasted over.

However, Hearts added to their advantage four minutes after the restart when Johnsen’s glancing header from Robbie Muirhead’s corner found the net despite substitute Lionel Ainsworth’s attempts to keep the effort out at the back post.

Hearts defender Rherras justified the merits of having a man on the post when he kept out Ainsworth and Heneghan’s headers in quick succession.

Hearts all but sealed the win in the 66th minute following a fine counter-attacking move that was started and rounded off by Walker.

The playmaker outmuscled Steven Hammill in the centre circle after a Motherwell corner broke down and played in Djoum, who set up Walker for a low drive beyond Samson.

Conor Sammon replaced Johnsen and came close to finding the target – but the Irishman dragged a shot wide from the edge of the box after being set up by Djoum.

Hearts claimed the clean sheet with some desperate defending after John Souttar cleared an Ainsworth effort on the line, before Rherras denied Louis Moult with another clearance at the back post.