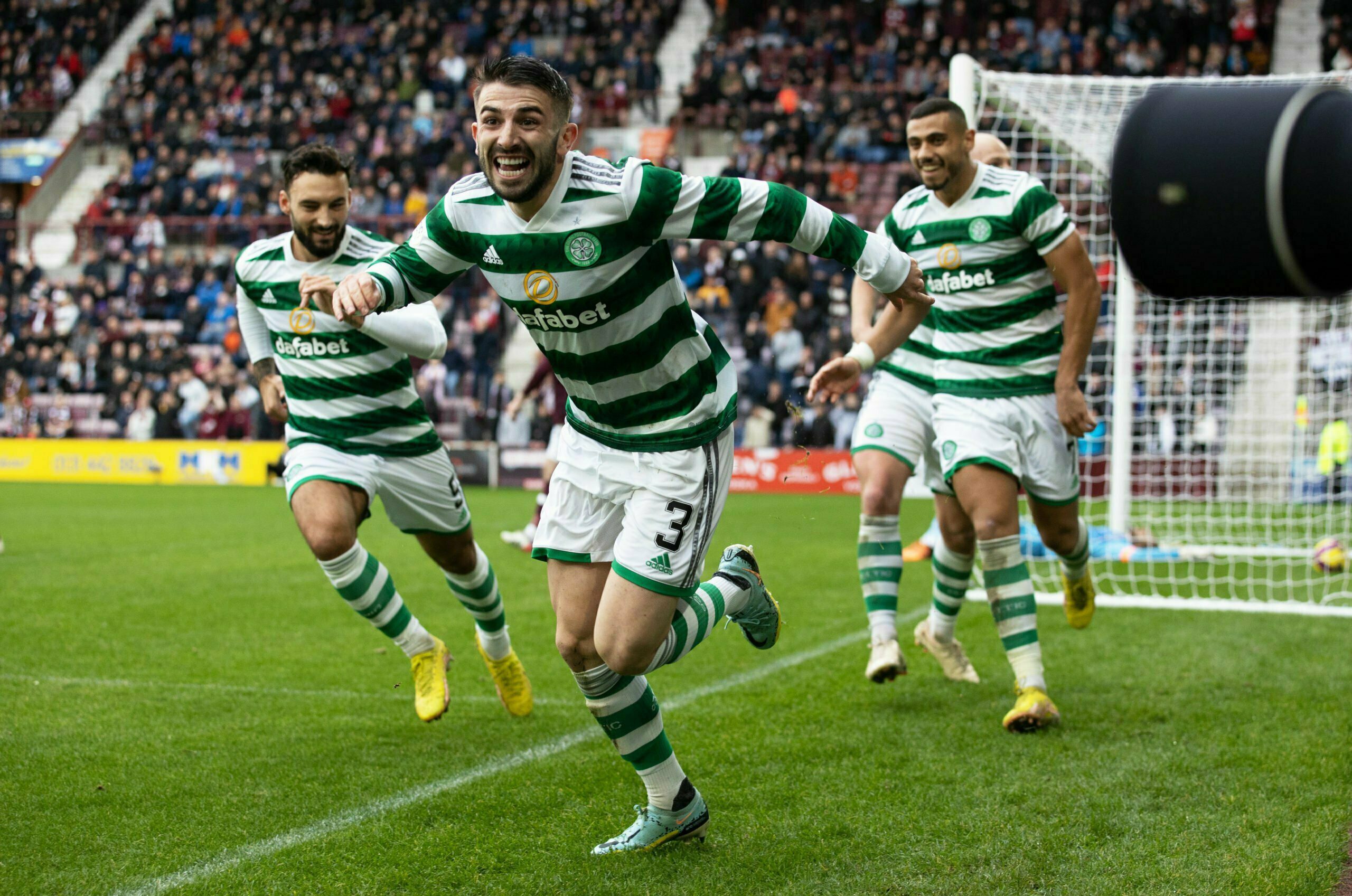 Greg Taylor scored his first Celtic league goal this season to give his side a 4-3 win over Hearts in a game for the ages, filled with VAR drama.

Lawrence Shankland came off the bench to score a hat-trick for the home side, but still managed to be on the losing side thanks to goals from James Forrest, Daizen Maeda, Giorgos Giakoumakis and match winner Taylor.

In it’s debut weekend, VAR awarded Hearts two penalties and denied Celtic their own spot kick as the sides exchanged the lead in a frantic afternoon.

Ange Postecoglou restored James Forrest to his starting line-up after he was left out in the Premier Sports cup mid-week, despite a hat-trick last weekend.

Eight minutes in and Barrie McKay had an early opportunity for the hosts, the winger making a late run ahead of Ralston to latch on to a fizzed ball in. His shot was gratefully collected by Joe Hart as both sides started slowly.

Robert Snodgrass then carved a second chance for Neilson’s men as he drifted through the lines and fired a shot straight at Hart.

Moments later though and he was made to regret that miss as Celtic took the lead through the inform James Forrest.

Anthony Ralston saw his cross deflected into the six-yard box where the winger was on hand to head into an empty net.

Celtic had the ball in the net again on the 20-minute mark, only to see the newly implemented VAR system rule it out after referee Nick Walsh had blown for a foul.

Anthony Ralston met Aaron Mooy’s free kick with a diving header at the back post, but it was judged to be a foul by the officials.

Hearts were hit with more injury problems before half time, as Humphrys had to be replaced by Shankland.

Inevitably, VAR would play a part and on the stroke of half time Hearts were awarded a penalty after Nick Walsh was sent to the monitor.

Substitute Shankland stepped up and converted to send the sides in level at the break.

Celtic then had their own penalty claim waved away by VAR after the ball appeared to strike Michael Smith on the arm. Much to disbelief of manager Postecoglou, Walsh decided not to point to the spot.

Minutes after the second half started and Hearts took the lead. Josh Ginnelly picked out Shankland with a driven ball across the face of goal for the forward to tap in.

Aaron Mooy then missed a glorious chance to put Celtic ahead when he sent his strike wide from the edge of the area, despite being on his own.

It was a breathless opening 10 minutes to the second half, as Postecoglou’s men did eventually pull level with Giorgos Giakoumakis heading in from a corner.

Celtic then re-took the lead after Craig Gordon parried Aaron Mooy’s shot only as far as Daizen Maeda, who bundled the ball in to give his side a 3-2 lead.

The drama only continued as Hearts went up the park and were awarded another penalty, with Cammy Devlin going down under the challenge of Mortiz Jenz.

Lawrence Shankland stepped up looking to score a hattrick from the bench but was denied by Joe Hart, only for Josh Ginnelly to follow up and turn the ball in for the equalizer. VAR intervened again though and ruled the penalty should be re-taken, which Shankland gratefully obliged to dispatch his third of the afternoon.

With 15 minutes remaining, Greg Taylor added another chapter is this dramatic game as he gave Celtic the lead once more. The full back latched on to a ball at the far post to force home his first league goal for the club.