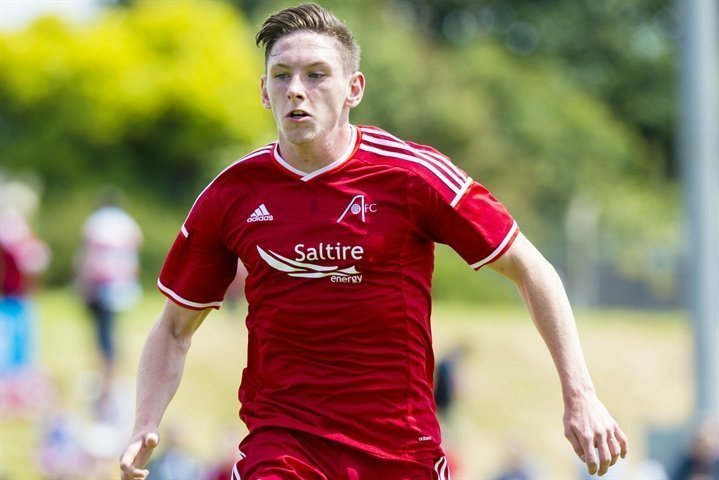 I’m not worried I’ve not heard from Aberdeen, I want to win the league with Morton – McManus

Aberdeen striker Declan McManus says he isn’t worried that he hasn’t heard from Derek McInnes as he is busy attempting to win Scottish League One with Morton.

McManus is on loan to the Ton and has been nominated for the League One PFA Player of the Year after netting 20 times this season but his future is uncertain with his contract up in the summer.

The 20-year-old concedes it would be very hard to leave the Dons as they have been a huge part of his life but, before he thinks about his next step, his concentration is on securing the title for Morton.

“I’ve not really wanted to get into it yet I have just wanted to play my football and try to win the league.

“I’ve got some personal goals: I’m trying to get the Golden Boot and the player of the year would be the icing on the cake.

“I’ve been at the club 11 years and it’s a big part of my life. It would be very hard for me to leave there but I can’t call the shots I’m not the manager.

“I’ll just play my football see what happens and see who speaks to me.

“I’m not worried that I’ve not heard from the manager. Sometimes that can get into players’ heads especially when we’ve got a big run-in come in. I’m quite glad that nothing has been spoken about yet.“

McManus admits he has got a tall order in trying to force his way into the first team with Adam Rooney on scintillating form for the Dons but he has full belief in his own ability.

“You’ve got Adam Rooney who’s probably up for player of the year. It’s going to be a very hard job for me and a couple of others.

“It’s a very tough task for me but I would be up for it and I would back myself to get in the team more regularly.

“It’s not frustrating, but obviously other boys at other clubs gets a bit more luck – we always sign boys that seem to come in flying.

“But then again it’s been a plus for Aberdeen we’ve won the Cup, on course to finish second have been in Europe so it’s been good these past few years. The manager has done a very good job I can’t complain at not being put in the team.

“The loan move has completely changed me as a player. There has been so many ups and not many downs which is always a plus. I’ve managed to get into the Scotland U21s, score myself goals, get some exposure and we’ve still got the league to play for.

“For my first full season in my career it’s more than I could have asked for. It’s a massive game this weekend away to Stranraer if we get beat we are out of it but if we win it we are in the driving seat.”