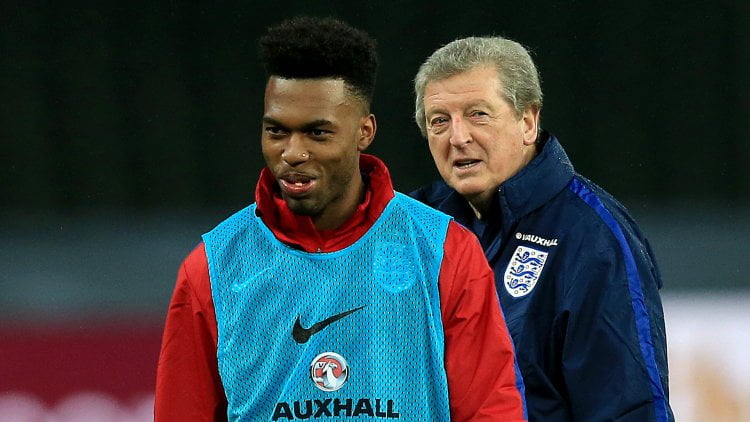 ‘Injury-prone striker still has his edge’

Roy Hodgson believes Daniel Sturridge still has his edge and challenged the oft-injured England striker to prove his fitness ahead of Euro 2016.

While the 26-year-old’s quality has never been doubt, the striker’s fitness has been as a string of injuries will mean 19 months have separated his 16th and 17th international caps.

Tuesday’s friendly against Holland will be Sturridge’s first appearance since the drab post-World Cup friendly with Norway in September 2014 and offers the chance to shine ahead of the Euros.

Hodgson has confirmed the Liverpool striker will start at Wembley and hopes that the striker, just as with Arsenal’s Danny Welbeck, can use prove his fitness and ability before the season is out.

“We’re pleased to have another quality player like Daniel available and knocking on the door, trying to make it clear that he should be the first name on the team sheet,” the England boss said.

“All I can do is to give him the opportunity when he comes with the England team.

“If we look back over the last two years, he hasn’t been able to get to get that many games behind him because of injury.

“It has been a damn sight more frustrating for him than for me because I have others who can play.

“When he’s not available someone else plays, but it must have been enormously frustrating for him.

“But, I’ve got to say, during these seven days we’ve been together now, he doesn’t seem to carry any frustration with him. He just seems to be back to the player he was.

“But I would like people like him and Danny Welbeck to make certain that in the four or five weeks that remain in the season to get as big a build-up as they possibly can of fitness, conditioning and match play, as well as training, so that they can convince me they are once again at the very, very height of their powers.”

The squad has “changed enormously” since Sturridge’s involvement in the 2014 World Cup, with the emergence of players such as Harry Kane and Jamie Vardy giving England attacking strength in depth that makes them the envy of many rivals.

Such options means Hodgson may well face a selection headache when it comes to naming the Euro 2016 squad on May 12, but considering taking one, rather than both, of Sturridge and Welbeck due to fitness concerns is not on his agenda.

“I don’t see any reason at the moment to doubt the pair of them or their ability and capacity to challenge and to show us they’re the best people for the job,” he said.

“But the next few weeks are important for those two because I’d like to see them getting a bit more match play and fitness under their belts.”

Sturridge has also shown flashes of quality after getting his stop-start season back on track, with Liverpool team-mate James Milner impressed by the way he has seamlessly slotted in.

“When you’ve been out for such a long time, I think the one thing you probably see is how quickly it takes someone to get back up to speed,” the stand-in England captain said.

“It might take weeks, it might takes months. For him, it seems to take a warm-up and then he’s straight out there, chopping right and left, beating players. His touch is there and his ability in front of goal.

“There’s absolutely no change at all. As he’s older and the experiences he’s gone through with the injuries, it has probably made him mentally stronger and a bit more hungry.”

Sturridge’s desire has in the past been questioned by some, but Milner seemingly extinguished such accusations.

“How Sergio does that sometimes I don’t know. On a Thursday and Friday he’s trotting about and then turns it on at the weekend.

“But Studge is sharp in training, he can go both ways and score goals. Now obviously he just wants to stay fit, get as many games under his belt and keep scoring goals.

“He’s similar (to Sergio). We’re lucky to have him in the squad. Those sorts of players – there’s not too many of them about, who can create something out of nothing.”