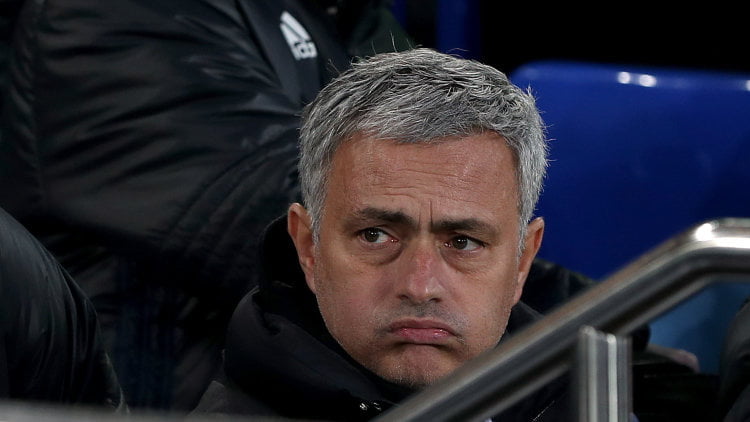 Jose Mourinho gave an ill-tempered press conference after Manchester United suffered a late equaliser against Everton, dismissing the opposition as a long-ball side, claiming to have missed key moments in the game and citing double standards in the media.

Zlatan Ibrahimovic’s finessed first-half finish, a long-range lob over the advancing Maarten Stekelenburg, looked to have settled the points, but Leighton Baines made it 1-1 from the penalty spot after a last-gasp trip from Marouane Fellaini.

Asked for his view of the penalty and then a crude first-half challenge that should have seen Marcos Rojo sent off, the Portuguese twice answered: “I didn’t see it.”

He was more forthcoming on other perceived slights, though.

Invited to justify his decision to send for Fellaini late in the game, he said: “I thought you would know more about football than you do, the answer is obvious.

“Everton is not a passing team any more like they were in the past. Everton is a team that plays direct: goalkeeper direct, Ashley Williams direct, Funes Mori direct. Everything direct.

“When you have on the bench a player with two metres (in height) you play the player in front of the defensive line to help the team to win the match.”

Mourinho went on to suggest sides managed by him were not given a fair rub of the green by the English football media, adding a side-swipe at unnamed teams elsewhere in the league for good measure.

“When my teams are playing pragmatic football and winning matches and winning titles you say that is not nice and not right,” he said.

“Then my team play very well – and is a huge change to the last two or three years (at United) – now you say what matters is to get the result no matter what.

“In this moment we have teams getting results that defend with 11, kick ball and attack the space on the counter-attack…it is phenomenal, it’s beautiful.

“You have to make a decision.”

At the heart of Mourinho’s frustrations, of course, are results themselves.

This was a sixth draw since the start of October and he clearly believes that represents poor value compared to performances.

“We are not getting the results we deserve,” he said.

Everton boss Ronald Koeman has overseen just one win in nine now but the manner of the comeback and the identity of the opponent left him in good spirits on this occasion.

“We can fight back, we showed that today,” he said.

“We did not deserve to lose the game and we showed that fighting spirit in the second half.

“We showed commitment and quality.”

He also took a measured view on Michael Oliver’s refereeing performance, refusing to make a big issue of the Rojo transgression.

“It’s difficult…maybe if the referee watched it back it will be a red card but it’s a tough decision for a referee in that situation,” he said.

“We always have discussion if it is a red or a yellow, yes or no to a penalty. Finally it is a fair result because both teams deserve not to lose the game.”