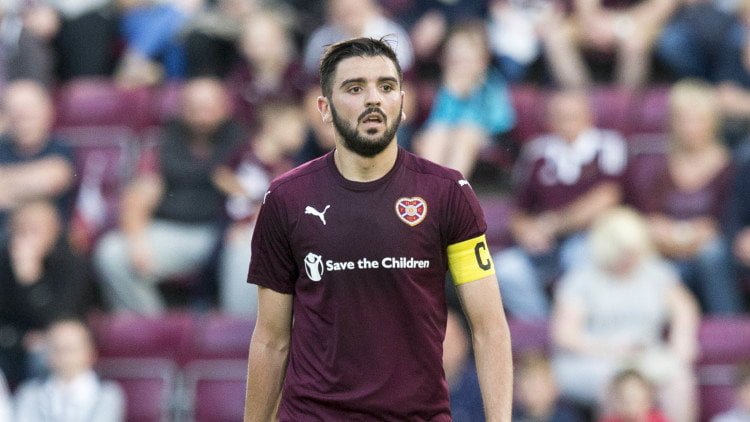 Hearts head coach Robbie Neilson has revealed he has shelved contract talks with displaced captain Alim Ozturk until the defender gets himself back into the team.

But Neilson has backed Ozturk to do just that after being impressed with the way he handled the news that he had to hand over his armband to Perry Kitchen.

Neilson appointed the United States midfielder as club captain this week, making the change after Ozturk lost his place.

And the 23-year-old, who is in the final season of a three-year contract, will need to regain his starting position before talks over a new deal are renewed.

“We’ve spoke to Alim, but he has to get himself back in the team now,” said Neilson, who confirmed that talks were ongoing with midfielder Sam Nicholson.

“It’s important that, if players are here, they have to play football. Alim’s at an age where he has to play.

“If he gets himself back in the team, then we continue negotiations and keep talking. But it’s up to him now to focus on that.”

Ozturk has not featured in the Ladbrokes Premiership this season and was dropped after Neilson was unhappy at his defending of long balls during their 3-2 Betfred Cup defeat by St Johnstone.

But the Hearts head coach said: “He’ll get back in the team. We have four good centre-halves. (Krystian) Nowak has not had a chance to get in because John (Souttar) and (Igor) Rossi are doing so well.

“It’s important we have competition for places. There’s no point having two good centre-halves and nothing behind it. We’ve got four good ones and it’s up to them to fight for the position.”

Neilson admitted telling Ozturk he was no longer captain had been a hard conversation.

“It’s always difficult,” he said. “You have to make decisions in football. You are not going to keep everyone happy all the time.

“I had a good conversation with Alim. He was disappointed but he understood and accepted the decision. He has just got to focus on his game and try and get himself back in the team.

“He’s a top player as he has proven in the last couple of years. I just felt with Perry coming in and doing so well, it was a good opportunity to move things forward again.

“I just felt it was the right thing to do at the right time. Perry has come in and proven to be a real leader in the group, and I felt he had established that leadership in there.

“I always feel that when things are going well, it’s the right time to make big decisions.”

Kitchen will lead the team out for the first time against Ross County in the league match at Tynecastle on Saturday.

“Also, round about the place, he is a great character to have. He is one that leads the training, he leads the gym work.”