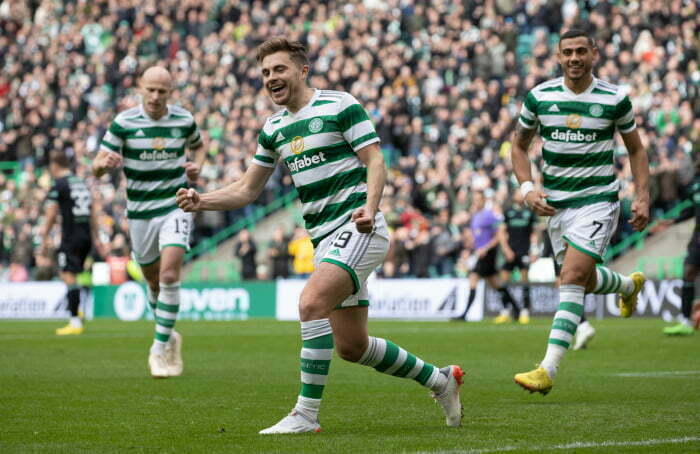 By Blair MalloyOctober 15, 2022No Comments

Celtic took the lead within the opening 10 minutes. Sead Haksabanovic found the experienced James Forrest at the back post, the winger then prodded the ball home from close range to score his 98th goal for the Hoops.

The champions were then two goals ahead before the 20-minute mark. Alexandro Bernabei carved out space on the left before rolling ball across goal for Giorgos Giakoumakis to turn in the home side’s second.

The home fans were treated to a festival of football, and it was soon 3-0. James Forrest helped himself to another when David Marshall spilled the forward’s shot over the line, leaving himself one goal off of the century.

The visitors almost went ahead early, as James Brown saw his shot crash off the underside of the bar.

Livingston took the lead 10 minutes before half time. Excellent work out wide from first Montano, before Guthrie and Nouble saw the ball break to Dylan Bahamboula, whose deflected shot found the back of the net.

Tony Watt almost had Dundee United ahead on the half hour mark. The striker was picked out from a Kieran Freeman cross only to send his header over the bar.

It was the home side that took the lead however, when Ross Callachan found the top corner from close range minutes before half time.

Ten minutes before half time, Ryan Strain stung the palms of Kilmarnock ‘s Zach Hemming. The goalkeeper pushed the Australian’s effort over the bar to maintain parity on the score board.