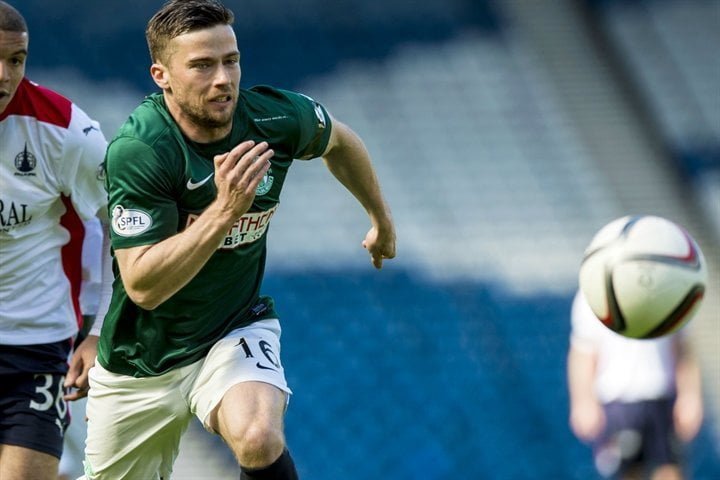 By IainJune 4, 2015November 22nd, 2022No Comments
Hibernian full-back Lewis Stevenson has signed a new two-year deal at Easter Road, the club have announced.

Stevenson, 27, is the longest serving player at the Leith outfit and has made over 250 appearances since making his debut in 2005.

“I’m delighted to have agreed the new deal – I always wanted to stay with Hibs and the future here looks really bright, so hopefully now I can help the club to get promoted,” he said.

“It’s mad how quickly the past 10 years have gone by – there have been some highs and also a few lows.

“But my aim is to be part of bringing the good times here again and that starts by winning promotion next season.

“When I made my debut for Hibs, I never thought that I would still be playing for the club 10 years later.

“It’s an achievement to be at such a big club like Hibs for so long and hopefully I’ll be here for many more years to come.

“Last year was probably my best season at the club. I’ll always be willing to play wherever the manager wants me to play, but it helps playing in the same position week in, week out.

“Left-back is probably my best position – it suits the way I play – and I’ve enjoyed working with the manager – he gives me confidence and belief to play to the best of my ability.”

Hibs have looked to get their business done early this summer with Stevenson joining Fraser Fyvie and David Gray in committing their futures to the club.

Stubbs said of Stevenson’s new deal: “We’re delighted – Lewis’ decision to sign a new contract is another piece in the jigsaw coming together.

“The deal is a reward for the season he’s just had; I believe he’s been a very influential player on the team.

“He’s been reliable and dependable and we’re really pleased that he has pledged his future to the football club.

“He’s been a pleasure to work with; he’s a great pro, who gets on with his job.

“He doesn’t say an awful lot, but the lads all love him and that speaks volumes about his character and he always plays consistently well for the team.

“Thanks once again to the backing of our supporters, who, through HSL and season ticket sales, have enabled us to be proactive and sort our business out during the early stages of the summer break.

“The plan is to ensure we have everything properly in place for the start of the new season so we can hit the ground running and progress.”