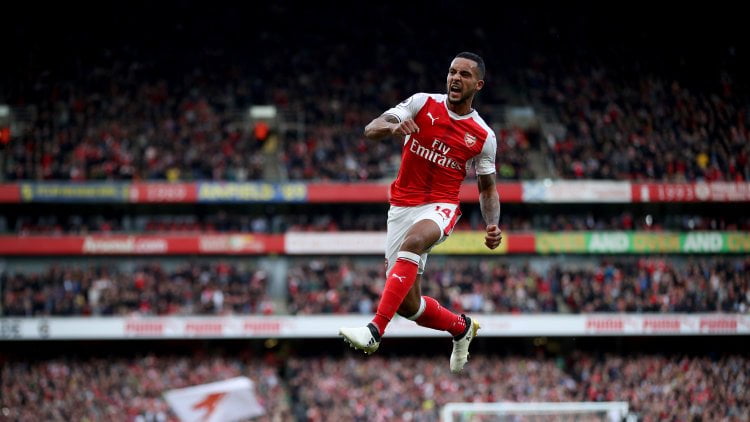 Theo Walcott celebrated the birth of his second child with a goal in Arsenal’s win over Bournemouth and moved closer to winning a coffee machine from his wife in the process.

The 27-year-old was present for the birth of Arlo on Saturday and was given dispensation from manager Arsene Wenger to link up later with his team-mates as they secured a 3-1 win over the Cherries to move to within three points of Premier League leaders Chelsea.

Alexis Sanchez gave Arsene the lead having been gifted possession by Steve Cook, but Eddie Howe’s side struck back as Callum Wilson converted a penalty having been fouled in the box by Nacho Monreal.

Walcott’s header early in the second half restored the lead for the Gunners, with Sanchez finishing off a flowing move at the start of stoppage time.

The win means Arsenal broke a run of three successive draws and extend their unbeaten run in all competitions this season, which stretches back to their opening weekend defeat to Liverpool.

For Walcott, his header was his ninth goal of the season and he revealed afterwards that he is closing in on winning a bet he made with his wife at the start of the campaign.

When asked if he was pleased to have scored so many goals before the festive period, the England international replied: “I want to get 10 so I can get a coffee machine for Christmas from my wife!

“She said ‘if you get 10 goals before Christmas, I’ll buy you this coffee machine’ so I can’t wait for that. That should hopefully happen.

“There have been a lot of ups and downs but hopefully this game can make sure we are back to the level we want to be.

“There is so much competition as well – the manager picks the team and there were a few more changes today which shows the squad’s strength in depth is very strong. It is a headache for the manager.”

Walcott has spoken several times this season about how he determined over the summer that he wanted to change his approach and hold down a position on Arsenal’s right wing, having been keen to play as their main striker in previous years.

With the former Southampton youngster now at home on the flank, Sanchez has been given a more central attacking role and has already reached double figures for the season following his brace on Sunday.

That has led to Olivier Giroud becoming more of an option off the bench for Arsene Wenger, with Walcott keen to continue building on his budding relationship with the Chile international.

“They are both completely different characters and different players,” he said when asked about the difference between playing with Giroud or Sanchez as the main striker.

“Olivier’s strengths are fantastic. I know he will be very frustrated with the amount of games he has not played but if you look at his scoring record and how effective he has been when he has been on the pitch, it just shows he keeps on reminding the manager what he can do.

“Alexi, obviously me and him are having a very good relationship at this moment in time. At the start of the season, we created goals for each other and everything was happening. Now, you are starting to see signs it is happening again.

“We can’t dwell on the past now. We have to make sure we are ready. It may be a completely different team but who knows?

“Alexi has stepped up to making that position his and I think he is enjoying it. I can see the smile when he’s playing.”

Despite Arsenal getting the three points and breaking their November duck, Bournemouth put in a strong performance as Eddie Howe’s side continue to earn plaudits.

Wilson’s penalty saw him move clear as the club’s all-time leading Premier League goalscorer with nine, and the striker felt the Cherries did themselves proud at the Emirates Stadium.

“Unfortunately, we didn’t get the result we wanted but I think there’s a lot of positives we can take out of it,” he told afcb.co.uk

“We had chances in the game, definitely…so I think the scoreline doesn’t really reflect how we played.

“I think a lot of teams could come here and just let Arsenal have the ball and sit off. We came here, pressed them high up the pitch, tried to make it uncomfortable for them and I think for 45 minutes we did that.”