Chelsea on the up

By Peter MartinFebruary 27, 2016No Comments 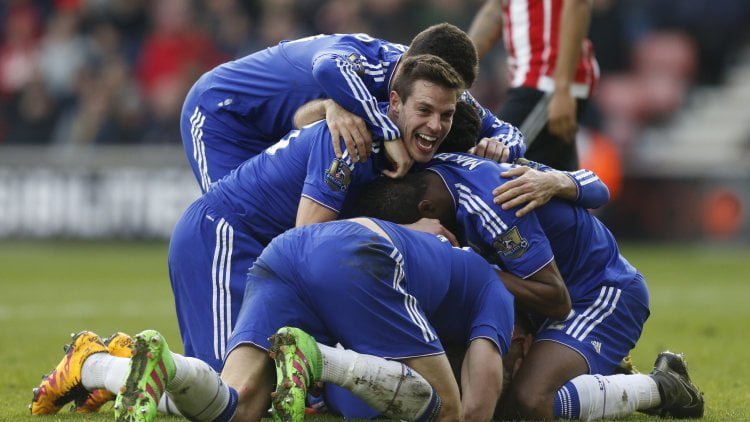 Even after the hosts had gone ahead through Shane Long’s fine first-half goal, the Blues continued to play with confidence and became the first team to score against Southampton in seven games thanks to Cesc Fabregas’ cross-cum-shot in the 75th minute.

The result leaves Saints seven points behind the top four and Chelsea, in 11th, still in pursuit of the top 10, but the additional three points strengthens their sense of momentum in a season that may yet not prove so dreadful.

Enjoying a run of five wins from their past six fixtures, it was surprising that Southampton manager Ronald Koeman made changes to his team in replacing striker Graziano Pelle with Charlie Austin and recalling right-back Cedric for the unfortunate James Ward-Prowse.

Chelsea, as expected, remained unchanged from the team which last weekend defeated Manchester City 5-1 in the FA Cup. However, they were forced into a sixth-minute substitution when Pedro went down injured with Oscar his replacement.

Their interim manager Guus Hiddink had overseen only one defeat and a significant improvement since his return to the club in December, but, by his own admission, their in-form hosts represented more than a routine threat.

It was in that context that Southampton created the more convincing of the first half chances.

Long headed just over the crossbar, with Thibaut Courtois out of position and most of the goal to aim at, from Virgil van Dijk’s 10th-minute right-wing cross, and in the 31st minute Austin struck just wide of the right post when shooting from the edge of the area.

Chelsea, however, were also gradually improving, yet just as Eden Hazard shot high and wide after a nice build-up, an individual error led to Southampton taking the lead.

With the softest of headers, Chelsea left-back Baba Rahman headed into Long’s path in the 42nd minute, and the Ireland forward raced through on goal to demonstrate his composure with the classiest of deft, close-range chips over the onrushing Courtois and into the back of the net.

Fabregas had already criticised Rahman for conceding possession when misreading the Spaniard’s pass, so it was perhaps little surprise when Hiddink replaced the left-back with Kenedy at half-time.

Chelsea sought an equaliser after the interval, hoping to finally breach Forster’s goal, but Diego Costa volleyed wide of the left post from in front of goal from Hazard’s superbly-delivered cross.

There was a touch of fortune about Fabregas’ equaliser.

The Spaniard appeared to be crossing to Hazard from the left of the area but the Belgian’s sheer presence made Forster hesitate and watch the in-swinging delivery creep past him and inside his left post.

Then Willian’s run and shot from the edge of the area went just wide, which looked like Chelsea’s best chance of victory had passed.

But the Brazilian sent an 89th-minute corner to Ivanovic and the defender routinely headed the winning goal in from in front of goal to continue their fine form.