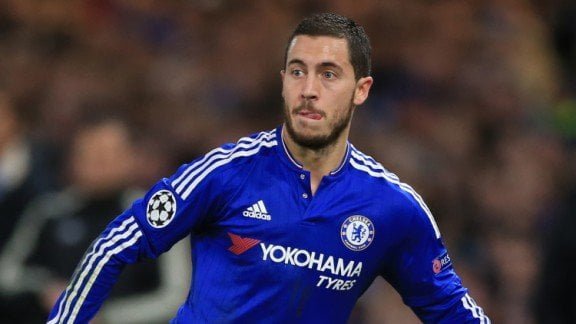 Chelsea playmaker Eden Hazard has a warning for Leicester after their Barclays Premier League title success.

“It’s not easy to play as the champions, that’s for sure,” Hazard said on chelseafc.com.

Champions 12 months ago, the Blues finished 10th, 31 points behind Leicester, their successors, with whom they drew 1-1 on Sunday.

The 25-year-old Hazard has belatedly found form as Chelsea have toiled.

Hazard added: “We knew that (it would be difficult) and it started from the first match.

“We maybe lacked a bit of combativeness compared to the year before.”

Chelsea’s miserable season began on the opening day, on August 8, when a 2-2 draw with Swansea was overshadowed by then manager Jose Mourinho’s criticism of first-team doctor Eva Carneiro and physio Jon Fearn.

Carneiro continues to pursue a claim for constructive dismissal against the club and a separate personal legal action against Mourinho after the Portuguese criticised her for going on to the pitch to treat Hazard.

Mourinho was sacked for the second time in December, with Chelsea in a precarious position.

Guus Hiddink, whose second caretaker spell ended following the Leicester draw, brought stability, but had just one home win in the Premier League.

John Terry said Chelsea finished the campaign where they deserved to be when addressing supporters on his potential farewell.

The 35-year-old, who has made 703 appearances since his debut in October 1998, was suspended for the final two games of the season and may never again be seen in Chelsea colours.

Terry, whose current contract expires on June 30, said in January he would be leaving Chelsea at the end of the season. The club insisted an offer may be forthcoming and it arrived last week.

The defender said it was for a “different role”, hinting at reduced terms and without guarantees of a first-team place under incoming head coach Antonio Conte.

He thanked the supporters who serenaded him, but a planned kick about with friends at Stamford Bridge was cancelled without explanation.

Terry wrote on Instagram: “Thank you all so much for your unbelievable support yesterday and all season.

“This season has been tough on us all but we will bounce back next year. THANK YOU.”