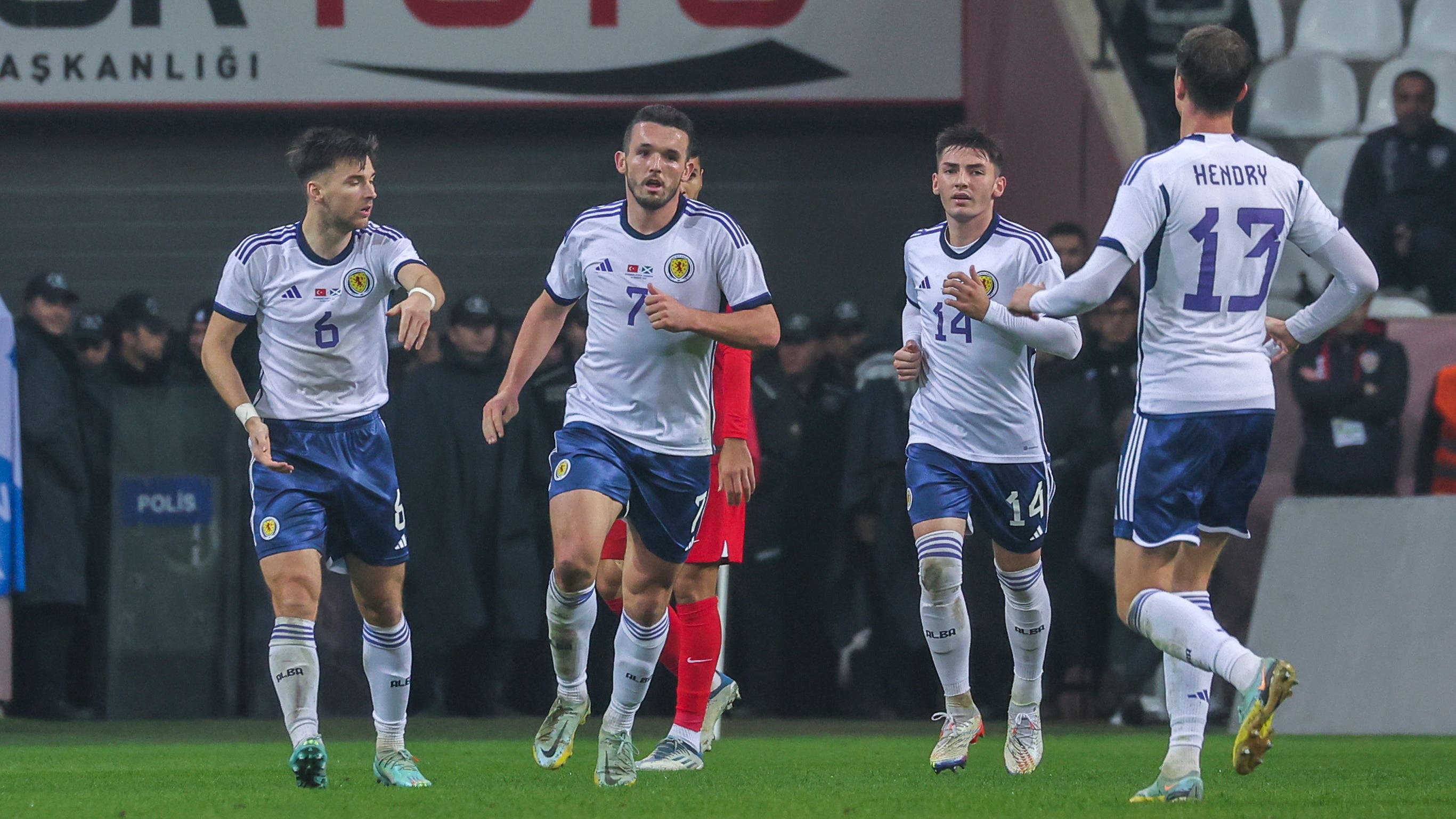 Scotland slip to defeat in Turkey

By By Ronnie Esplin PANovember 16, 2022No Comments

Scotland succumbed to their first defeat in five matches with a 2-1 friendly loss to Turkey in Diyarbakir.

Defender Ozan Kabak headed in the opener for the home side five minutes before the break after earlier hitting the crossbar before attacker Cengiz Under doubled the lead with a confident finish four minutes after half-time.

As the game looked to be slipping away from Steve Clarke’s side, midfielder John McGinn pulled a goal back in the 61st minute with a powerful drive.

But despite the second-half improvement they could not complete the comeback, with 19-year-old Liverpool defender Calvin Ramsay notably making his Scotland debut off the bench.

There were no Celtic players involved because of the Hoops’ tour to Australia and Kenny McLean, Che Adams and Nathan Patterson calling off late.

However, Clarke fielded a very experienced side with skipper Andrew Robertson, Kieran Tierney and Grant Hanley included while Turkey had a sprinkling of players from top clubs such as Leicester defender Caglar Soyuncu, Marseille attacker Under and captain Hakan Calhanoglu of Inter Milan.

The home side began positively.

The influential Calhanoglu had a decent drive saved by Craig Gordon for a corner in the sixth minute before the keeper parried another drive from the same player moments later with Cenk Tosun missing the target with the rebound, although the offside flag was up.

Then, in the 18th minute, Kabak beat Hanley to Irfan Kahveci’s cross and crashed a header off the bar with Gordon beaten.

Three minutes later, however, Fraser was caught out by a long ball to substitute Eren Elmali but Gordon blocked the shot and the Scotland goal survived the corner.

However, the Scots failed to heed their earlier warning and after Hanley fouled Tosun, Calhanoglu’s whipped-in free-kick found Kabak who beat Hanley and Scott McTominay to direct a header past Gordon for his first international goal.

Turkey pressed for a second before the break and Under curled an effort wide of the target from just outside the box while a Hendry challenge on Tosun inside the penalty area brought fruitless claims for a penalty.

Ramsay took over from Fraser for the start of the second half to make his debut with Scott McKenna on for Hanley but the visitors soon found themselves further behind.

When Stuart Armstrong lost possession at the edge of the Turkey box, the home side countered with pace and former Leicester attacker Under cleverly knocked the ball through the legs of McKenna and past Gordon.

However, just after the hour mark, the Scots were back in the game when McGinn’s powerful run towards the goal ended with the Aston Villa midfielder fending off Soyuncu and driving into the far corner.

Now it was Scotland’s turn to play with confidence.

Ryan Jack and Ryan Christie replaced Billy Gilmour and Armstrong in the 66th minute before Hendry headed over from a corner after Dykes had flicked on.

Then Lewis Ferguson and Jacob Brown came on for McTominay and Dykes as Clarke utilised all his allowed substitutes but the Scots could not fashion the chance required to grab the draw, with Christie firing over, to keep their unbeaten run going.