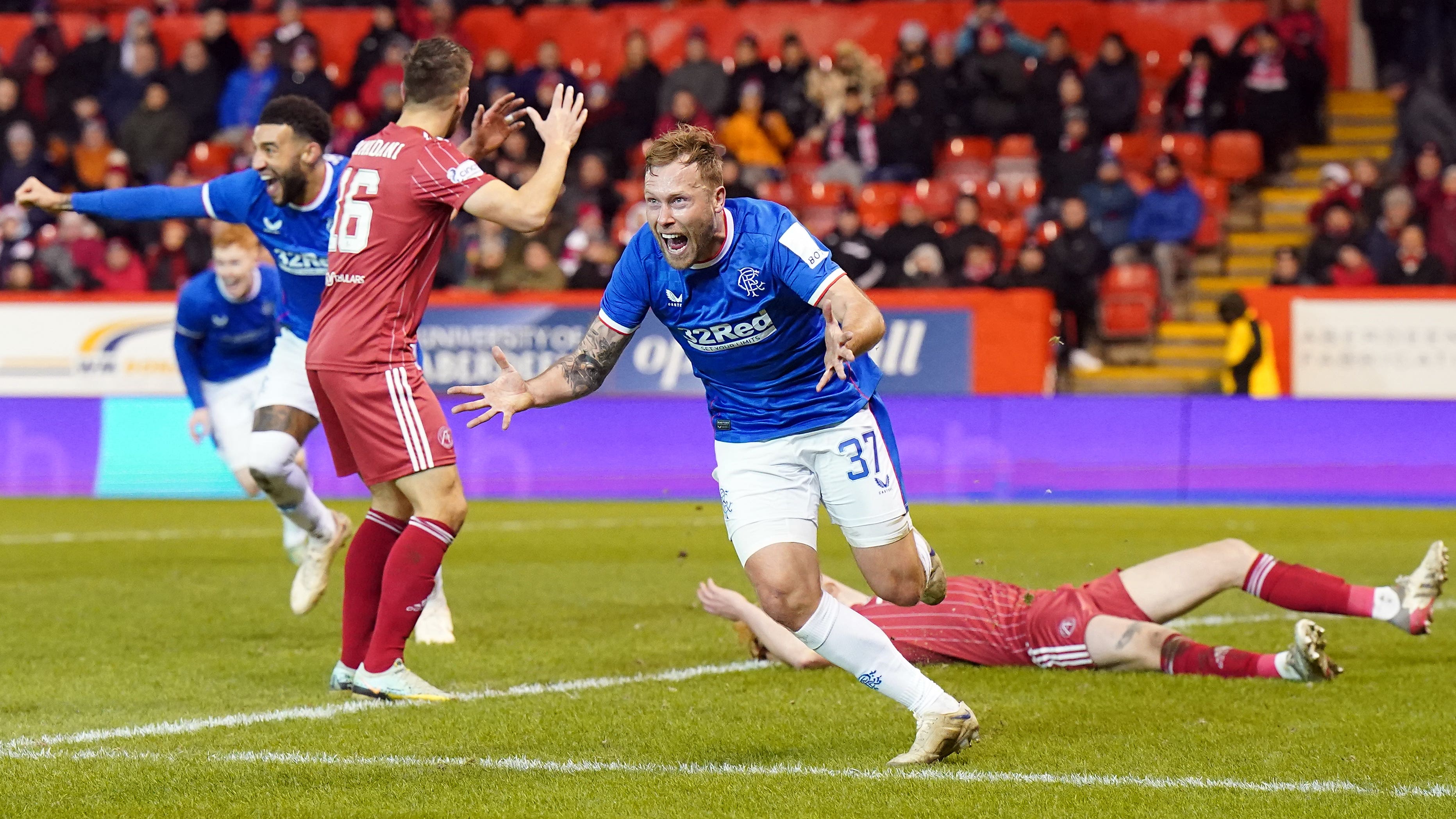 By By Ronnie Esplin PADecember 20, 2022No Comments

A dramatic Scott Arfield double in added time gave Rangers a stunning 3-2 win over Aberdeen in the cinch Premiership.

Dons boss Jim Goodwin came in for widespread criticism following his side’s defensive display in the 1-0 home defeat by Celtic on Saturday and his side were keen to make amends but fell behind to a Fashion Sakala goal after 12 minutes.

The Granite City men levelled just before the break when attacker Luis ‘Duk’ Lopes beat Ibrox keeper Allan McGregor with a free-kick from 20 yards and midfielder Leighton Clarkson, on loan from Liverpool, scored a tremendous second in the 53rd minute – but Rangers dug deep.

Substitute Arfield pounced to level in the fifth minute of seven added on at the end of the game before grabbing a dramatic winner with seconds remaining to move Michael Beale’s side six points behind league leaders Celtic.

The positive news for Gers fans before the game was that Connor Goldson, out since October after suffering a thigh injury, made his long-awaited return to the Gers defence as John Lundstram dropped to the bench.

Dons loan defender Liam Scales, unable to play against parent club Celtic at the weekend, came back in along with wing-back Jayden Richardson, with Jack MacKenzie on the bench and Matty Kennedy out altogether.

The visitors, though, were confident and purposeful in possession and their opener came after a one-two between former Aberdeen midfielder Ryan Jack and Alfredo Morelos.

When the Colombia striker cut the ball back to Sakala, his first unconvincing attempt from 12 yards was blocked by Dons skipper Anthony Stewart but his second found the net.

Aberdeen wobbled and moments later Ibrox midfielder Malik Tillman set up Morelos inside the box but his shot was saved by Dons keeper Kelle Roos.

The home side stormed back and Richardson’s cross from the right came off James Tavernier and hit the post before Duk’s shot was deflected for a corner.

However, Aberdeen were buoyed and Duk’s cross from the left minutes later found Ylber Ramadani but the midfielder missed the target from 16 yards.

Then came the equaliser, after Gers defender James Sands was booked by referee Willie Collum for a foul on Aberdeen striker Bojan Miovski 20 yards from goal. Duk curled the free-kick over the wall and past the flailing McGregor, who looked as if he could have done better.

Aberdeen came out for the second half fired up and soon went ahead. Scales’ cross into the box was cleared by Sands but only to Clarkson, who sent a dipping shot from distance over McGregor and into the corner of the net.

Beale brought Ben Davies, Scott Wright, Arfield and John Lundstram on for Sakala, Sands, Jack and Glen Kamara in an attempt to turn the game back in Rangers’ favour.

However, the Govan men looked disjointed and increasingly desperate.

In the 76th minute Arfield’s volley from 16 yards was parried by Roos before defender Ross McCrorie cleared the loose ball to safety.

Aberdeen kept up their work rate as Rangers dominated the latter stages but the pressure paid off when Roos fumbled a 25-yard drive from Kent, allowing Arfield to fire in from close range – before the Gers midfielder bundled in a third moments later from six yards to complete a remarkable turnaround.