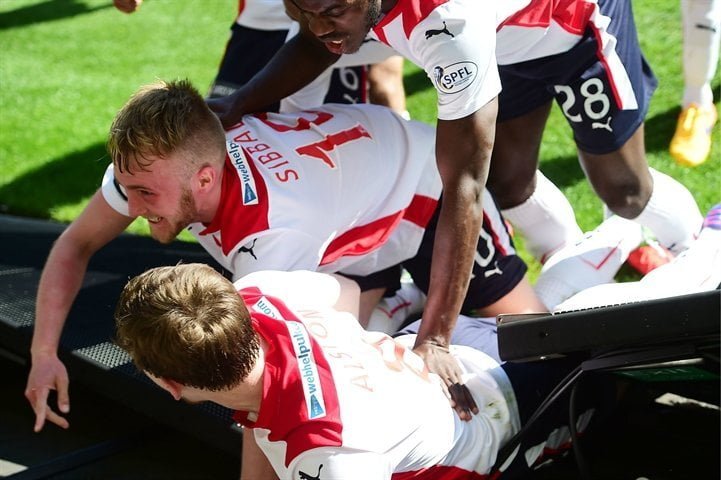 By Craig Turnbull at Hampden Park

Falkirk booked their place in the Scottish Cup final courtesy of Craig Sibbald’s header in a narrow 1-0 victory over Hibernian.

Hibs will feel aggrieved at the scoreline as they dominated for large periods of the game.

Fraser Fyvie had cannoned the post with a 25-yard shot and Scott Allan had rattled the bar, while Lewis Stevenson and Farid El Alagui passed up further chances.

Their profligacy was to prove costly as Falkirk netted against the run of play.

In a rare forage into Hibs’ final third, Blair Alston surged down the right and delivered an inviting ball into the box, Sibbald showed great determination to reach the ball first before powering a header beyond goalkeeper Mark Oxley 15 minutes from time.

Goalscorer Sibbald said after the game: “Best day of my career. I don’t know how to feel after that I’m just buzzing. When the goal went in I didn’t know what to do. I had goosebumps.

“This has saved our season. It’s going to be hard to make the play-offs but we’ll be going into it [final] geared up. We’ll take anyone in the final it’s a one-off game hopefully I can score in that too. We wanted to get payback for 2013 so I’m delighted.

“We knew we weren’t going to get many chances so I’m glad I put that one away.

“They hit the post and they had chances and you start to think it’s going to be your day when they missed.”

He added: “My brother Gary is a Hibs fan he sent me a big emotional text before the game, saying ‘I’m proud of you no matter what Hibs come second’, so I’m sure he’s buzzing.”

Falkirk showed grit and nerve in the face of unrelenting pressure, but unlike in 2013 when they let a three-goal lead slip against Hibs they held on.

A disconsolate Fyvie said after the game: “It’s very hard to describe the feeling. Everyone is hugely disappointed. We dominated the game, we had so many chances but we’ve been saying this for the last five weeks we need to put the ball into the back of the net but nobody is doing that.”

“Obviously, the boys were a bit angry with each other but there’s no divide.”

The Bairns will face Celtic or Inverness CT in the final on May 30.