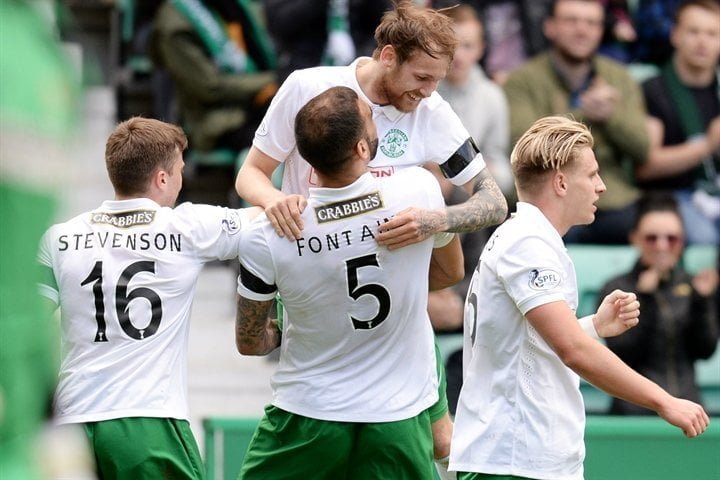 Hibernian leapfrogged Rangers to move second in the Championship heading into the final round of fixtures after a comfortable 4-1 win over Alloa at Easter Road.

Birthday boy Martin Boyle celebrated in style as he opened the scoring before Liam Craig’s deflected effort put the hosts two in front before the break.

A well-worked move saw Alan Stubbs’ side extend their advantage with Scott Allan again at the centre of everything good for Hibs.

His incisive pass found Dominique Malonga, who squared for Jason Cummings for a tap-in and his 19th goal of the season.

Iain Flannigan netted a consolation for the visitors profiting from some poor defending from a cross ball again before Malonga put the seal on a vital result.

Hibs, who play Falkirk on the final day, only have to better Rangers’ result against Hearts to secure second and two games less in the play-offs.

However, Stubbs played down the significance of finishing ahead of the Gers.

“We’ve always tried to concentrate on ourselves the fact it’s gone for us today is irrelevant if we don’t do it ourselves next week.

“It’s great that we know now that if we win next week it’s irrelevant what happens at Tynecastle and that’s what we’ll be aiming to do.

“If we finish in second it gives us an extra few days that we can recover if not it’s just a normal working week.

“I think a lot more has been made of finishing second that what it maybe actually means. There’s no evidence to suggest there’s a huge advantage.”

Defeated Alloa boss Danny Lennon knows they need to win next week against Cowdenbeath to give themselves a fighting chance of staying in the division.

A point separates the bottom three teams, with Alloa playing the Blue Brazil, while Livingston,who won 4-0 against Raith Rovers on Saturday, play QOS.

“Every team will be looking and thinking it’s in their own hands. We’ll be going there and looking to get the performances like we’ve had against Dumbarton and Queen of the South.

“If we play that we’ll give ourselves a great opportunity of playing Championship football next season.”