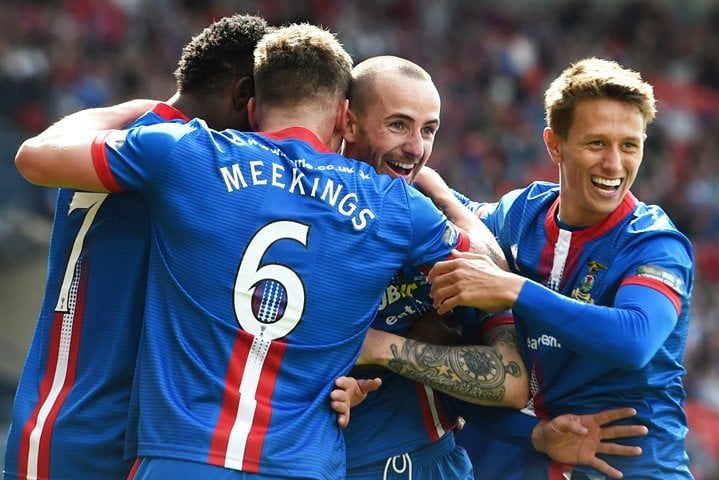 History will never forget them.

It’s the stuff of dreams that has now become a reality.

The highland club formed in 1994 now prepare for European football for the first time with a group of players who can boast about finishing third in the Premiership and securing the first ever major domestic trophy in the club’s history.

The manager of the year John Hughes must have thought this wasn’t going to end well for him at Hampden.

Caley are just over twenty years old, but in a crazy final 20 minutes they almost handed Falkirk the cup, with Carl Tremarco red carded and Peter Grant’s equalising goal for the Bairns.

However, just when it looked as if ten men would actually fold in regulation time or possibly extra-time, goal-scorer Marley Watkins turned goal-maker with a lung bursting run from the halfway line, his shot was parried by Jamie MacDonald into the path of the grateful James Vincent to win the cup for Caley.

There’s no doubt Falkirk were the better team in the second half, but it was Inverness who took the lead seven minutes before the break after a wonderful through ball from Aaron Doran set Marley Watkins up with a chance to round the goalkeeper and fire into the empty net.

Falkirk came out with all guns blazing in the second half and when Carl Tremarco was red carded for fouling Blair Alston, as he was all set to burst through on goal, you sensed the pendulum was swinging towards Peter Houston’s boys.

Tremarco’s poor touch had allowed Alston in and the challenge left referee Willie Collum with no other decision than to send him packing in the 75th minute.

The last word, however, belonged to Caley and James Vincent’s tap in owed more to poor goalkeeping from MacDonald than any great power in the initial shot from Watkins.

Four minutes left and from about six yards out Vincent etched his name into the history books forever with a Scottish cup winning goal.

Super Caley fans went ballistic, knowing full well that this moment in time had more than eclipsed their other cup heroics when Celtic were atrocious!

It was hard on Falkirk, but for Inverness manager John Hughes and his players it is a day they will never forget for as long as they live and if anyone is unsure of what happened on the 30th May 2015, they only have to check the history books to find out.