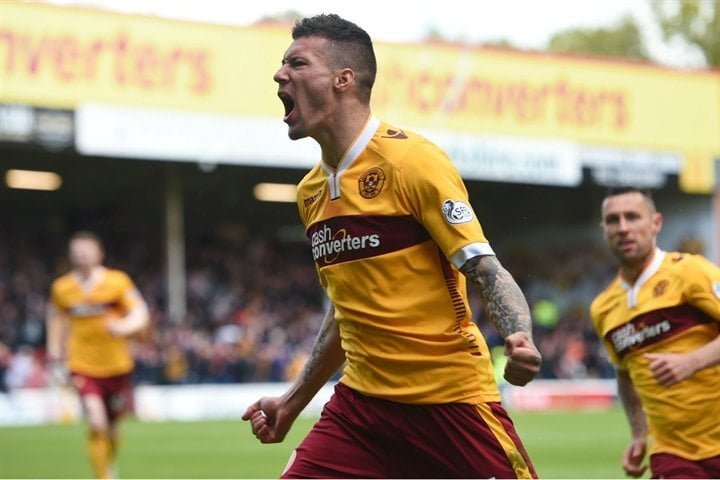 Rangers face another 12 months in the Scottish Championship after they were comprehensively beaten by Motherwell, who preserved their Premiership status with a 3-0 (6-1 agg) win at Fir Park.

A calamitous error from Light Blues goalkeeper Cammy Bell shortly after the break gave the Steelmen the opener when he punched Marvin Johnson’s deflected effort into his own net.

Lionel Ainsworth doubled the hosts advantage, firing a shot past Bell from the edge of the box after to kill off the tie before John Sutton added a late penalty.

There were ugly scenes at the full-time whistle as Rangers substitute Bilel Mohsni kicked and punched Well striker Lee Erwin – who had pushed the Tunisian after he refused to shake his hand – before a melee broke out. Both of these players were sent off as well as Motherwell’s Fraser Kerr.

Much of the talk heading into the final had been centred around Rangers completing the three-year journey back to the top tier but it is the Steelmen who are celebrating after maintaining their 30-year stay in the division.

You only had to go back 12-months to the play-off final last year between Hamilton Accies and Hibernian to realise a two-goal lead could be a precarious position but in truth Ian Baraclough’s men were barely troubled here.

Rangers, who made three changes from the first leg with on-loan Newcastle full-back Shane Ferguson making his debut, had no option but to come out firing.

However, the anticipated onslaught didn’t materialise, with only a couple of tentative efforts from Kris Boyd – reinstated in the starting line up along with club captain Lee McCulloch in place of Nicky Clark and Dean Shiels – testing the claret and amber resistance in the opening stages.

The Light Blues did though enjoy the lion share of possession and they were a few nervy moments in the Motherwell box though the visitors were unable to capitalise.

That gave the Steelmen confidence and at the other end Lee Erwin engineered space to fizz a shot wide after good work by Louis Laing in the box, before Stephen McManus headed wide and Johnson flashed a shot past Cammy Bell’s left-hand post.

Set pieces remained Rangers greatest threat and Marius Zaliukas missed a huge chance before the interval to open the scoring, guiding his effort over the bar before penalty appeals were waved away by referee Craig Thomson when Kenny Miller fell under pressure in the box from Scott McDonald.

Disaster struck for Stuart McCall’s men when they fell even further behind in the tie shortly after the break following a mistake by goalkeeper Bell.

Johnson surged forward from midfield before unleashing a shot which deflected off Zaliukas, looped high into the air, deceiving Bell, who punched the ball into his own net.

It signalled the last throw of the dice for McCall, with Tom Walsh and Nicky Clark replacing Ferguson and Boyd. McCulloch then tried a spectacular effort before Clark passed up a half chance.

But the game was put beyond all doubt as Ainsworth fired past Bell – adding to his goal at Ibrox from the first leg – after an explosive run from the impressive Johnson.

Substitute John Sutton nearly inflicted further misery on the visitors but his shot was smothered by Bell.

But the striker wasn’t to be denied as Motherwell were awarded a penalty after Erwin was tripped by Lee Wallace and Sutton dispatched the spot kick into the net to spark wild scenes of celebration at Fir Park.