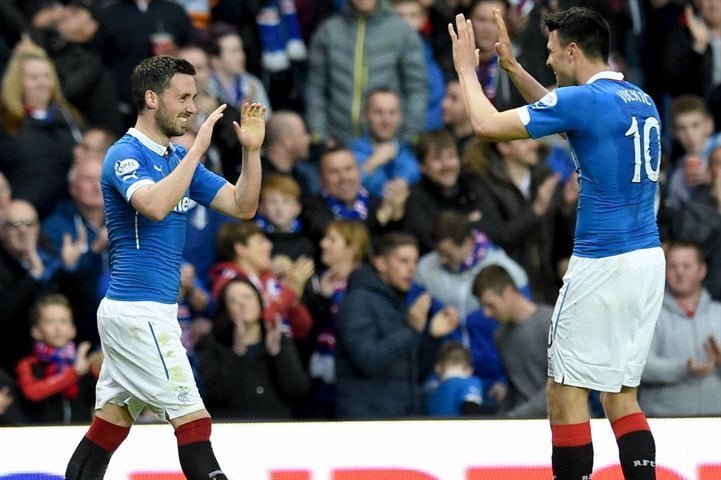 As Newcastle stare at the trap door to the Championship in England this weekend, one of their players is looking up the way to the Premiership in Scotland.

In the same week that Dave King was given the all clear to take up his position as Rangers Chairman, Slovenian Haris Vuckic underlined his ability to lead the club to the play-off final and beyond.

The loan Ranger was at the heart of everything positive for Stuart McCall’s side in their 2-0 win over Hibernian in Wednesday night’s semi-final 1st leg play-off.

Now Vuckic and Co will be looking for the next stage of their capital investment in Edinburgh for the return leg on Saturday.

I can’t see Hibernian scoring three goals without reply in the second leg, but maybe two will be enough to take it all the way to the nail-biting prospect of penalties.

Can you imagine Dave King watching on as he waits for a Rangers player to determine the financial state of the club for another twelve months with a spot kick?

I still maintain that over 75% of the current Ibrox team will not be wearing the jersey next season, if they get to the Premiership, but failure may preserve more than a few, in a perverse way, due to finances.

Rangers manager McCall deserves tremendous praise for getting the team to play to their strengths, which more often than not does not involve silky football.

The Ibrox boss realises the short-comings of a team lacking in creative class, so he has opted for an approach which has organisation at the heart of the team
ethic.

The plan is straightforward, nullify the opposition with strength and hope the creativity of Vuckic can open the door for the supporting cast to deliver the odd opportunity that arrives.

Nicky Clark and the ageing and energetic Kenny Miller duly obliged on Wednesday.

Rangers are workmanlike at best, Hibernian are silky with no cutting edge.

Power, for me, will triumph over the purists at Easter road on Saturday.