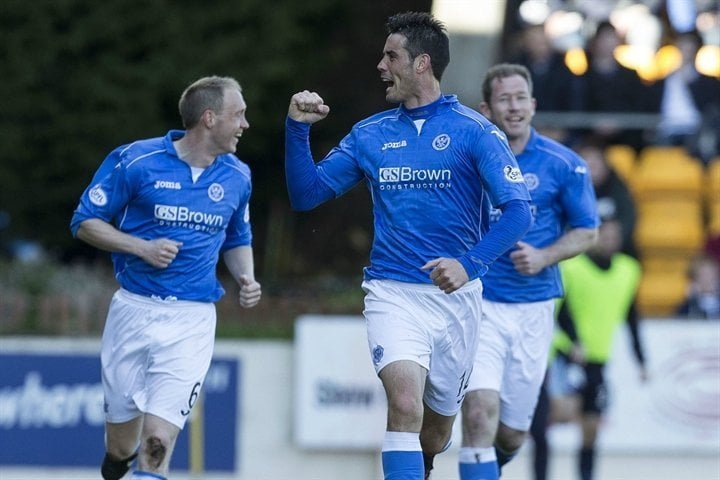 Brian Graham’s first-half strike secured St Johnstone’s place in the top six for the fourth successive season after a 1-0 win over Dundee.

Chances were at a premium in the Tayside derby but when an opportunity did present itself to the on-loan Dundee United striker he made no mistake.

Simon Ferry gifted the ball straight out of defence to Michael O’Halloran, the Saints attacker drove forward before feeding Graham at the edge of the box who cut inside and curled a delightful shot beyond the clutches of Dundee goalkeeper Scott Bain.

Dundee thought they found an equaliser when David Clarkson fired off the post. It was a chance out of nothing as Frazer Wright’s clearance was deflected into his path, the striker controlled the ball inside the box before firing a shot which cannoned the woodwork.

The Dark Blues rarely threatened Saints goalkeeper Alan Mannus thereafter but it would seem likely that their top-six spot is safe with Kilmarnock to play Aberdeen and Celtic before the split.

Saints boss Wright was thrilled with his side’s efforts.

“I think what they achieved this season has been nothing short of a miracle and I’m really proud of them.

“I have got nothing but praise for the players for what they have done again this season under really difficult circumstances losing Stevie May.”

Dundee boss Paul Hartley said: “We are nearly in the top six.

“Kilmarnock have still got two games to play and obviously we have got a game also.

“We will all be tuned into the game tomorrow and hoping Aberdeen can get a good result. If we can get in there it has been a fantastic season for us.”

Celtic were held in the Highlands after a 1-1 draw with Inverness.

Partick Thistle boosted their chances of avoiding the relegation play-off battle with a 2-0 win over Motherwell.