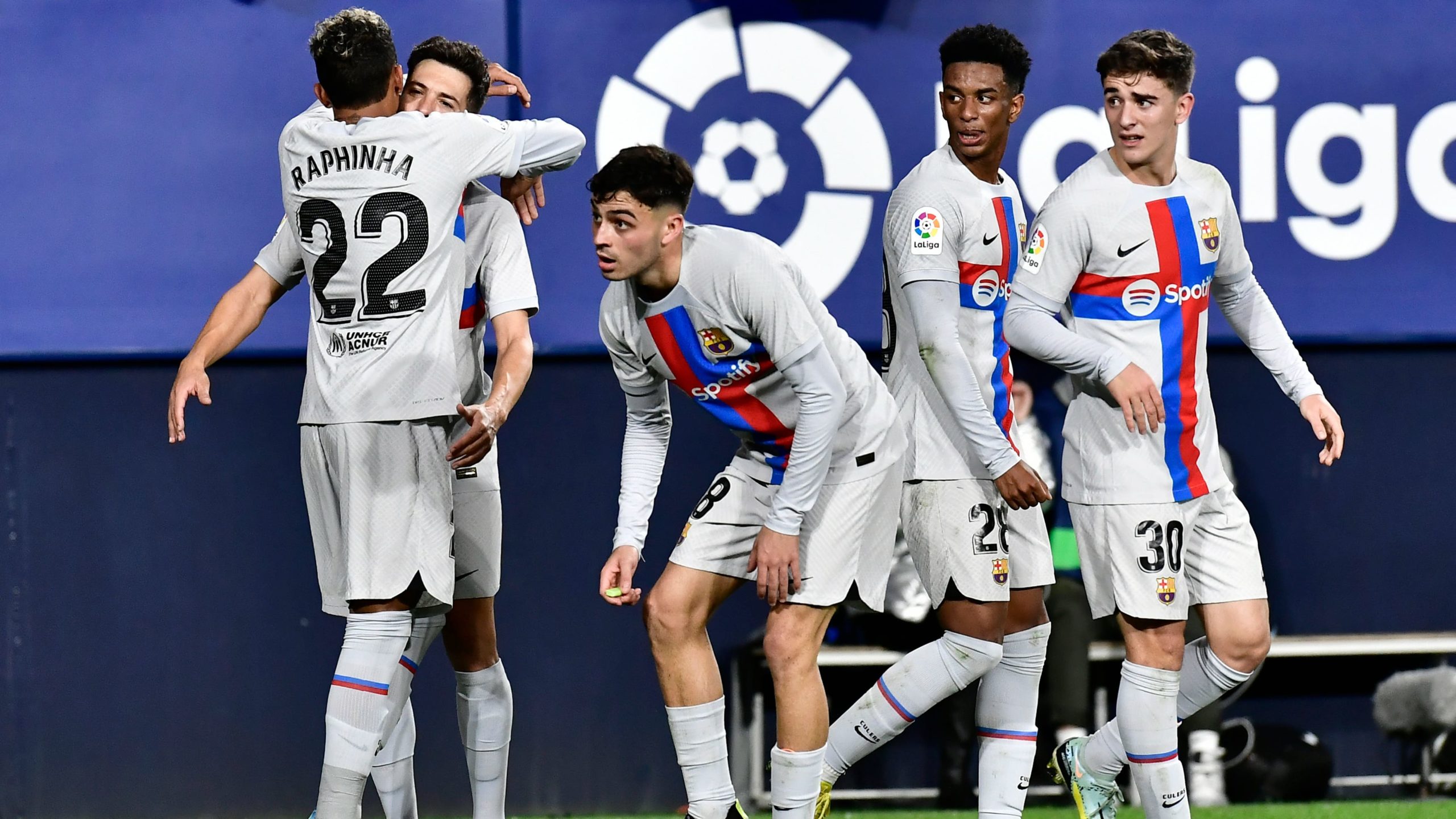 Gerard Pique saw red in his last ever game despite not even playing as 10-man Barcelona came from behind to beat Osasuna 2-1 and extend their advantage at the top of LaLiga.

Pique, named among the substitutes after announcing last week this would be his final match before retirement, was sent off at half-time for remonstrating with referee Jesus Gil Manzano.

At that stage, his side were trailing to David Garcia’s sixth-minute header, and had seen Robert Lewandowski sent off for a second bookable offence with half an hour gone.

Girona came from behind to win 2-1 away to Elche.

Pol Lirola fired the hosts in front after 18 minutes but Ivan Martin headed Girona level six minutes before the break and Valentin Castellanos got the winner midway through the second half.

A brace from Gorka Guruzeta helped Athletic Bilbao to a 3-0 win over Real Valladolid. Guruzeta scored in each half but Dani Vivian made sure with 12 minutes left.

Serge Gnabry scored a hat-trick as Bayern Munich moved four points clear at the top of the Bundesliga with a 6-1 rout of Werder Bremen.

Jamal Musiala fired in his ninth league goal of the season with just six minutes gone, and although Anthony Jung equalised moments later, there would be no denying Bayern a fifth straight win as they ripped through the visitors with three goals in six minutes.

Gnabry got the first with a curling effort in the 22nd minute before Leon Goretzka added another and Gnabry was set up by Leroy Sane to score again.

Second-placed Freiburg can cut the gap when they face RB Leipzig on Wednesday.

There was frustration for fourth-placed Borussia Dortmund as they lost 2-0 to a Wolfsburg side now unbeaten in seven.

Micky van de Ven headed the hosts in front just six minutes in and that stood until Lukas Nmecha finished from close range in stoppage time.

Konstantinos Mavropanos scored eight minutes into stoppage time to give Stuttgart a 2-1 win over Hertha Berlin, who had cancelled out Serhou Guirassy’s third-minute goal through Dodi Lukebakio midway through the first half.

Early goals from Christopher Antwi-Adjei and Philipp Hofmann set Bochum on their way to a 2-1 win over Borussia Monchengladbach, who pulled one back through Alassane Plea.

Napoli stretched their lead at the top of Serie A with a 2-0 win over Empoli as AC Milan were held goalless away to Cremonese.

Udinese drew at Spezia after Sandi Lovric’s goal two minutes before half-time cancelled out Arkadiusz Reca’s opener for the hosts.