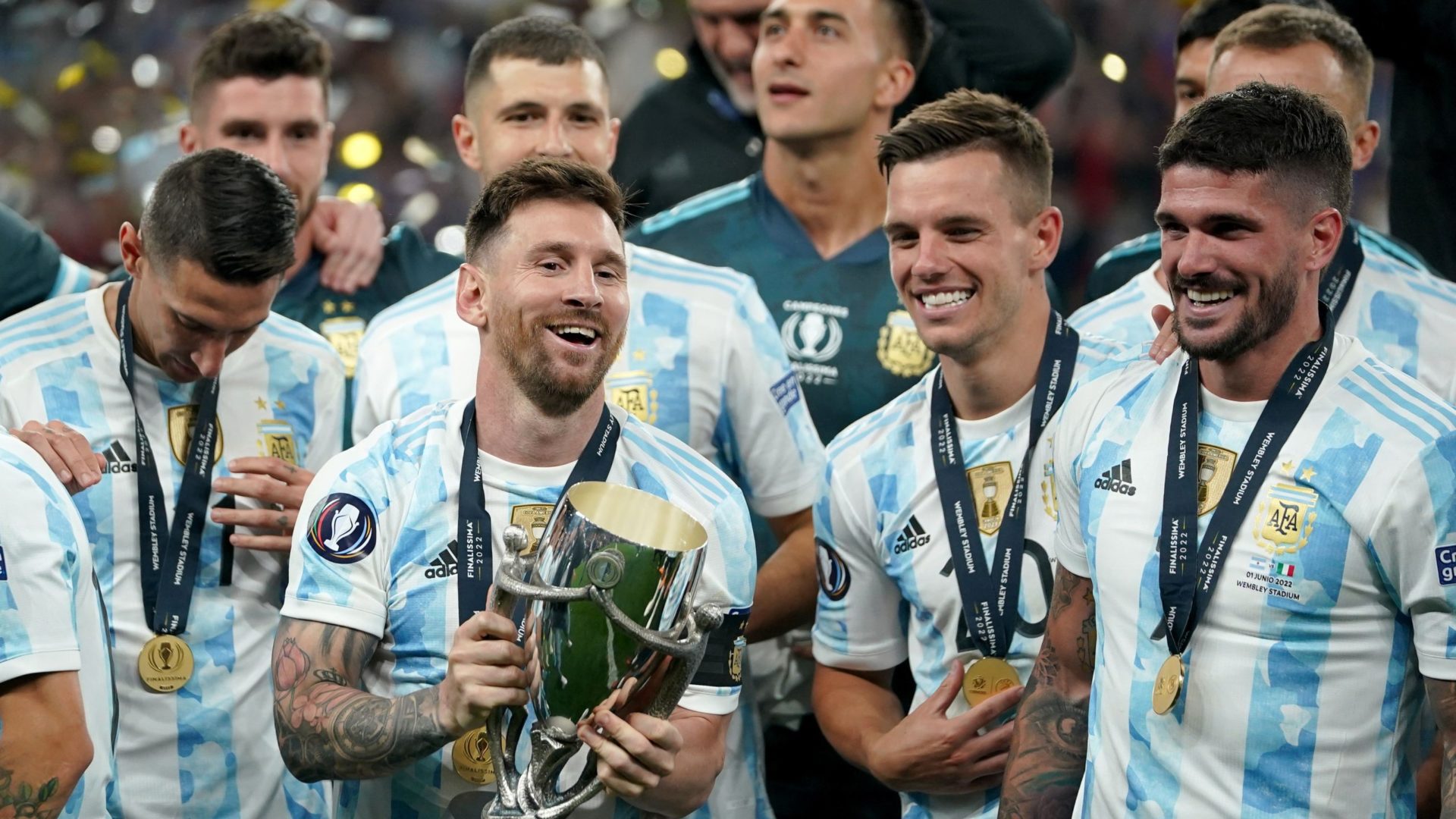 Lionel Messi hailed Argentina’s “beautiful final” after they downed Italy 3-0 to claim Finalissima success at a sold-out and partisan Wembley.

Goals by Lautaro Martinez, Angel Di Maria and Paulo Dybala helped Argentina win the third edition of the ‘Cup of Champions’ with the South Americans also successful in the 1993 match.

Wembley was full of sky blue and white with Argentinians enjoying their first trip to the new stadium having last visited in 2000 for a friendly at the old venue.

“It was a beautiful final, full of Argentines. What we experienced here was beautiful,” Messi told reporters.

“We’re here to fight anyone. Today was a nice test because Italy is a great team.

“We knew it was going to be a nice match and a nice setting to be champion”.

Messi has endured a tough debut season at Paris St Germain, scoring only 11 times with that his lowest goals total for a season in 16 years.

In what could prove his final appearance in England, the former Barcelona attacker set up the first following a wonderful turn to fool Giovanni Di Lorenzo with Martinez able to poke home Messi’s centre.

More flashes of brilliance came from the 35-year-old and midway through the second half he almost added another wonder goal to his greatest hits but his waltzing run from the halfway line ended with a tame shot straight at Gianluigi Donnarumma.

It was 2-0 by this point with Di Maria chipping over his PSG colleague in stoppage time of the first 45 and, while Messi would continue to be denied by his club team-mate, one final magic moment occurred.

With virtually the last kick of the clash, Messi’s would go on one more jinking run which ended on the edge of the Italy penalty area, but he was still able to lay off for substitute Dybala to fire home and make it 3-0.

“What counts is the sacrifice and struggle shown by the group. Beyond the title, we always look for performance”.

It was a difficult match for Roberto Mancini and his side, who returned to Wembley for the first time since their glorious night at the stadium last July where they beat England on penalties to clinch Euro 2020.

While that was a moment to celebrate for Italy, off the field it was an event marred by crowd trouble but the contrast could not have been more stark this time with the evening seemingly going perfectly to plan in the stands amid a party atmosphere.

“To play in Wembley is fantastic,” Mancini said.

“Every time we play here it is an incredible moment for football and for us. The atmosphere tonight was absolutely fantastic, in the end for us maybe not so good but this is football.

“I think they played better than us. We conceded the first goal from our mistake and after the yellow card for Leo (Bonucci), for him it was very difficult to play.

“The second goal maybe he didn’t take a tackle like he can do every time for this reason. After they had the control of the game in the second half and they have a fantastic striker, midfielders, they played very, very well.”