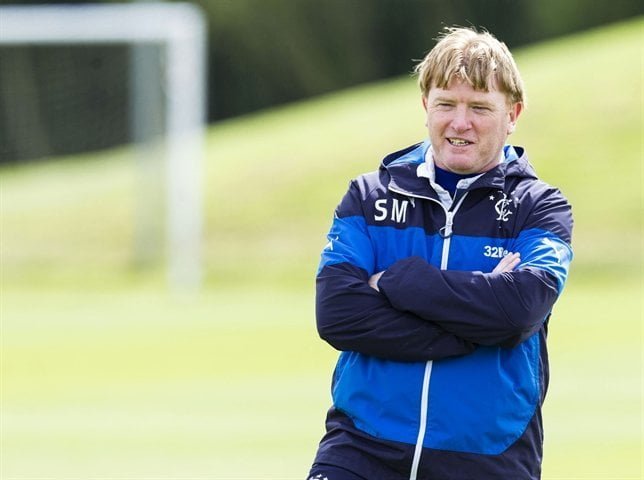 Stuart McCall says if he becomes manager on a permanent basis he would have to have the final say on players coming into Rangers if a director of football was appointed at the club.

The possibility was muted by Light Blues director Paul Murray in a press conference this week when asked about how the club could go forward.

Murray said: “In my time as chairman, I’ve spent a good bit of time looking at other clubs. Most clubs with aspirations to play in the Champions League have a director of football or technical director.

“We are looking at it. It could be part of our plan going forward.”

The director of football role has been implemented at Hearts with Craig Levein filling the position, while Robbie Neilson is head coach.

It’s a system which has served the Edinburgh outfit well having gained promotion to the Scottish Premiership at the first time of asking.

However, interim boss McCall, who accepts he will have competition for the manager’s job in the summer admitted he had heard some stories about the model which didn’t sit right with him.

“I would say 99% of managers would want to bring their own players to the football club and I think you can still do that with a director of football at the club as long as you have the final say on who comes in.

“It’s a bit different when you hear of a couple of instances down south or abroad over the years where a manager turns up and there are three players there and he doesn’t know a lot about them – that I think is going over the realms of what is proper – I think those are odd occasions though.”

McCall is busy preparing his side for the second leg of the semi-final play-off against Hibernian, whom they have 2-0 lead over.

“We need to defend well but we need to carry an attacking threat. We can’t sit in and give up ground and territory and the main point is that I am always confident that we can create chances and we’ve showed in recent games we can take them as well.

“It’s going to be tense it’s going to be nervy. I think outside Hibs, Rangers and Motherwell people have enjoyed these play-offs because it does create atmosphere and tension and nerves.”