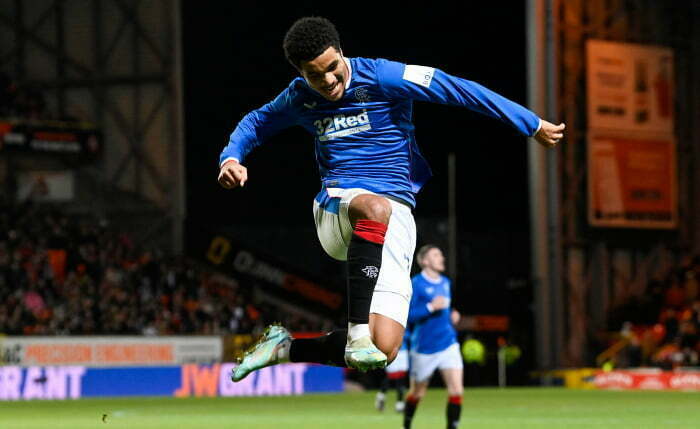 By Blair MalloyJanuary 8, 2023No Comments

Two goals, in two second half minutes, from Fashion Sakala and Malik Tillman secured a comfortable 2-0 victory for Rangers away to Dundee United.

Despite going in goalless at the break, Michael Beale extended his promising start as Gers boss after Sakala set the light blues on their way with a stunning volley after 54 minutes.

Malik Tillman then made the points safe with a cultured finish from the edge of the area moments later, cutting the gap to league leaders Celtic back to nine points.

Rangers travelled to Tannadice looking to maintain their six game unbeaten record since Beale took charge. Dundee United meanwhile were also unbeaten since the restart of the league following the world cup, but were still desperate for points to pull themselves put of a relegation scrap.

The visitors found themselves twelve points off the pace at the summit of the Scottish Premiership following Celtic’s narrow victory over Kilmarnock 24 hours earlier. Whilst it seemed imperative that Beale’s men pick up maximum points to keep any hope of a title challenge alive, the new boss admitted he was looking for the first ‘complete performance’ from his side.

Colombian forward Alfredo Morelos was the headline maker midweek, following his performance in last week’s Old Firm derby where he came under scrutiny. Despite Beale himself backing Morelos to ignore the critics and return to form, it was Antonio Colak that started up front for the light blues on his return from injury.

The Croatian had the first effort on target after 11 minutes, but his strike from outside the area was comfortably gathered by Mark Birighitti in the Dundee United goal.

The hosts grew into the game and began pressurising the Rangers defence, with former Ibrox winger Glenn Middleton regularly finding space on the left hand side and veteran forward Steven Fletcher a constant handful in the box for the newly flourishing defensive partnership of Ben Davies and Connor Goldson.

After a frustrating goalless first half, Rangers found the breakthrough ten minutes into the second half. Sakala latched on the ball clipped down the left wing to drive in behind the Dundee United defence. The Zambia international showed excellent composure to cushion the ball on his left foot before rifling a stunning volley past the helpless Birighitti.

The home defence looked despondent at finally being penetrated, which Rangers took full advantage of by scoring 2 gaols in as many minutes. Malik Tillman this time placed a cultured finish into the bottom right hand corner after the ball had broken to him in the area, giving Michael Beale’s side a comfortable 2-0 lead.

Rangers seen out the match take a valuable three points and close the gap on leaders Celtic back to nine points.